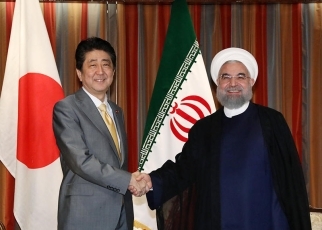 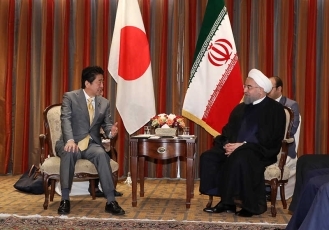 On September 19, from 11 a.m. (New York time) for approximately 40 minutes, Mr. Shinzo Abe, Prime Minister of Japan, held a meeting with H.E. Dr. Hassan Rouhani, President of the Islamic Republic of Iran. The overview of the meeting is as follows.

(1) President Rouhani welcomed Prime Minister Abe by stating that he is very happy to meet Prime Minister Abe every year on the occasion of the United Nations (UN) General Assembly while emphasizing that Japan is an extremely important country for Iran.

(1) President Rouhani welcomed the recent advancement in the Japan-Iran relationship and expressed expectation that Japan will promote investment in the energy field, particularly petroleum and gas. He also appreciated Japan’s support in the environmental field and expressed hope that cooperation will move ahead in the future including in the areas of advanced technology and tourism.

(2) In response, Prime Minister Abe stated that he is supporting corporate activities with the aim of expanding the two countries’ economic relationship, and he intends to promote cooperation in a wide range of fields such as medical, environmental, culture and tourism sectors.

(1) Prime Minister Abe explained that Japan supports the Joint Comprehensive Plan of Action (JCPOA) and hopes to see Iran’s continuous compliance with the agreement. He emphasized that it is important for all the parties to comply with the agreement and its spirit.

(1) At the beginning of the meeting, Prime Minister Abe stated that North Korea committed another launch of a ballistic missile that flew over Japan on September 15 and its recent nuclear test was a blatant act of defiance to the international community. He stressed that it is important for the international community to rigorously enforce the relevant UN Security Council resolutions in close unity and that it is necessary to put pressure that is stronger than ever on North Korea to make them change their policies.

(2) Prime Minister Abe added that he appreciated the unanimous adoption of the new UNSC resolution that includes significantly strict measures. He also emphasized that the resolution will have an effect to its full potential only if it is fully implemented and that he hopes Iran to do so.

(3) Furthermore, Prime Minister Abe stated that the abductions issue is a highest priority for his government and he hopes to have President Rouhani’s understanding and cooperation in resolving the issue promptly.

(4) In response, President Rouhani explained that the safety of friendly nations in East Asia including Japan is important to Iran. He added that Iran is opposed to a nuclear war, nuclear weapon development and intimidation with nuclear weapons and that Iran has delivered this message to North Korea.

(1) Prime Minister Abe stated that stable relations between major countries in the Middle East, particularly Iran and Saudi Arabia, is vital to the stability in the region, and that he hopes to see progress in confidence building between them.

(2) President Rouhani responded that he understands the importance of friendly relationship with Saudi Arabia, and that Iran too desires peace and stability in the region.