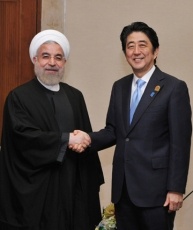 On April 22 commencing at 5:50 p.m. (local time, April 22 7:50 p.m. Japan time) for approximately 25 minutes, Prime Minister Abe and Iranian President Rouhani held a summit meeting, on the occasion of the Asian-African Summit in Jakarta to Commemorate the 60th Anniversary of the Asian-African Conference. An overview of the meeting is as follows (the meeting was also attended by Deputy Chief Cabinet Secretary Kato and others).

Prime Minister Abe welcomed the opportunity to meet with president Rouhani once again. While citing the fact that Prime Minister Abe stated the importance of not passing up the chance to settle the nuclear issue in the meeting held at the UN General Assembly last Autumn, he welcomed the significant progress on the nuclear issue at Lausanne. Prime Minister Abe also mentioned the signing of the treaty between Japan and the Islamic Republic of Iran on the transfer of sentenced person, which will be the first bilateral treaty following the Islamic Revolution, as well as the progress in cooperation in the fields of environment and medicine. The Prime Minister also expressed his firm belief that the Japan-Iran relationship will further develop once a final agreement is reached on the nuclear issue. President Rouhani also expressed his hope to strength relations with Japan in various fields such as economic, political and cultural area.

President Rouhani stated that along with progress in negotiations on the nuclear issue, Iran is enjoying active economic exchanges with other countries. While expressing his hope for Japanese companies to further intensify business in Iran, President Rouhani also indicated his intention to cooperate with Japan in regional economic activity and in the development and progress of countries in the Middle East as a counterterrorism measure. Prime Minister Abe confirmed the steady progress in cooperative relationship between the two countries on humanitarian, the environment and counter-narcotics fields, and expressed his hope for Iran to also utilize Japan’s advanced medical technology. Prime Minister Abe also indicated his anticipation of dramatic expansion in bilateral economic ties once an agreement is reached on the nuclear issue.