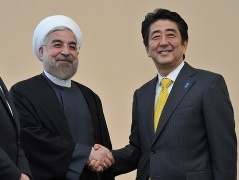 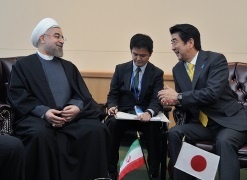 Photo: Cabinet Public Relations Office
On Tuesday, September 23, commencing at 9:40 a.m. (local time) for approximately 20 minutes, Prime Minister Shinzo Abe held a Japan-Iran Summit Meeting with Dr. Hassan Rouhani, President of the Islamic Republic of Iran, on the sidelines of the United Nations General Assembly being held in New York. The overview of the meeting is as follows. (The meeting was also attended by Deputy Chief Cabinet Secretary Hiroshige Seko, among others)

(1) Prime Minister Abe said he was happy to meet President Rouhani at the UN again following on from last year, and welcomes that bilateral exchanges are becoming increasingly active, including mutual visits by foreign ministers since last year's meeting. He said he would like President Rouhani to visit Japan for the Third UN World Conference on Disaster Risk Reduction in Sendai in March next year.
(2) President Rouhani responded that he was also happy to be able to meet again at the UN, along with saying that he listened with great interest to an address on Abenomics given by Prime Minister Abe at the Davos Meeting. In addition, President Rouhani said that since last year, bilateral high-level governmental exchanges have become increasingly active and bilateral relations are moving in a positive direction. He said Iran is placing an emphasis on its relationship with Japan, and this Summit Meeting is also important.

President Rouhani said the nuclear negotiations are progressing and he hopes mutual understanding will be reached soon. In response Prime Minister Abe said he is aware the negotiations surrounding the nuclear issue are at the final stage and this is an unparalleled opportunity to resolve the issue and restore the trust of the international community. Prime Minister Abe said he is counting on President Rouhani's leadership in utilizing this opportunity and displaying flexibility at this crucial phase.

President Rouhani said he is hoping for Japan's cooperation and investment in fields such as oil, petrochemicals, coal, energy, railroads, the environment and water-related issues. He also invited Prime Minister Abe to visit Tehran, following up on an invitation made last year, and said fields other than the economy that are important include the technology and IT fields, and he also wants to pursue cooperation in combating terrorism and drugs. Prime Minister Abe replied that once the nuclear issue is resolved bilateral relations will advance rapidly and trade and investment will expand. Regarding the invitation to Iran, Prime Minister Abe said if circumstances allow he hopes to visit accompanied by company representatives. Prime Minister Abe also welcomed the steady implementation of cooperation on environmental, humanitarian and anti-drug measures that were decided on at last year's Summit Meeting, and he mentioned the invitation from the Japanese Government to Iran's Minister of Health and Welfare to visit Japan and said he wants to expand cooperation in the medical field.

4. Situation in the Middle East

Prime Minister Abe said ISIL is a threat to the order of the international community and Japan is carrying out humanitarian aid in order to oppose ISIL, and wants to coordinate with Iran as well. Additionally, Prime Minister Abe said that amid the tumultuous situation in the Middle East, the role that Iran performs as a major nation in the region is significant, and he proposed holding regular exchanges of views on the Middle East situation between the two countries' foreign affairs ministries. Prime Minister Abe expressed expectation that given Japan's neutral position it can perform a role in building trust in the region. In response President Rouhani said that the instability of the Middle East region is expanding and he hopes to hold bilateral discussions, including between the two countries' foreign ministers. He said Japan and Iran can cooperate on the Middle East situation, and the meeting concluded.