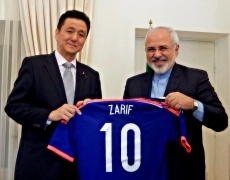 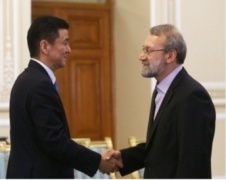 Parliamentary Senior Vice-Minister for Foreign Affairs Nobuo Kishi visited the Islamic Republic of Iran from June 9 to 11, and met with Dr. Javad Zarif, Minister of Foreign Affairs,  Dr. Ali Larijani, Parliamentary Speaker, and  Dr. Masoumeh Ebtekar, Vice-President and Head of Department of Environment. An overview of the meetings is as follows:

1. Meeting with Dr. Javad Zarif, Minister of Foreign Affairs (June 11; commencing at 11:30 a.m. for approximately one hour and 15 minutes)

3. Meeting with Dr. Masoumeh Ebtekar, Vice-President and Head of Department of Environment, (June 9; commencing at 4:30 p.m. for approximately 50 minutes)

(1) Parliamentary Senior Vice-Minister Kishi said he was glad to meet Vice-President Ebtekar for the second time since this April, and that amid the strengthening in Japan-Iran relations, which is also a matter of strong interest to Prime Minister Abe, environmental cooperation is one area of bilateral cooperation that has been affirmed in Japan-Iran Summit Meetings. He also stated that, based on the memorandum of cooperation in the field of environment signed when Vice-President Ebtekar visited Japan, he intends to steadily implement environmental cooperation. He also explained the Government of Japan’s support for preserving Orumieh  Lake.
In response, Vice-President and Head of Department of Environment Ebtekar said she expects that Parliamentary Senior Vice-Minister Kishi’s visit will have a positive impact on bilateral relations. She also said the strong will of the two countries’ leaders is having an impact in various fields, including the environmental field, and this can be expected to lead to concrete outcomes. Additionally, she said Japan’s support for the preservation of Orumieh Lake is generating high praise for Japan from the people of Iran. The two sides also exchanged views on water, atmospheric pollution, global warming and other challenges.
(2) Vice-President and Head of Department of Environment Ebtekar said that, based on the conversation she had when paying a courtesy call on Prime Minister Abe during her recent trip to Japan, she wants to actively encourage women-to-women exchanges between Japan and Iran. In response, Parliamentary Senior Vice-Minister Kishi said it is encouraging that the roles women play in society have risen. He referred to a speech on women made by Prime Minister Abe at the United Nations General Assembly last year and said it is with great pleasure that  women-to-women exchanges between Japan and Iran will become active.