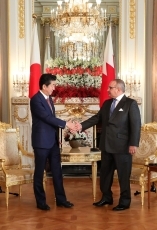 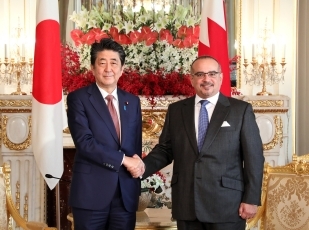 On October 23, commencing at around 11:35 a.m. for approximately 10 minutes, Mr. Shinzo Abe, Prime Minister of Japan, held a meeting with H.R.H. Prince Salman bin Hamad Al Khalifa, Crown Prince of the Kingdom of Bahrain, who is visiting Japan. The overview of the meeting is as follows. The meeting was also attended by Mr. OKADA Naoki, Deputy Chief Cabinet Secretary, and others from the Japanese side, and by H.E. Shaikh Salman bin Khalifa Al Khalifa, Minister of Finance and National Economy, and others from the Bahrain side.

1. Prime Minister Abe welcomed H.R.H. Prince Salman’s first visit to Japan in six years, and stated that he was pleased that Japan-Bahrain relations have expanded in a broad range of areas, based on their “Comprehensive Partnership towards Stability and Prosperity.”

2. In addition, Prime Minister Abe appreciated Bahrain’s removal of import restrictions on Japanese food products in this March, and expressed his expectation that Japanese food will further become popular in the Middle East, including Bahrain.

3. In response, H.R.H. Prince Salman stated that he was honored to attend the Ceremony of the Enthronement of His Majesty the Emperor, and expressed his intent to further expand Japan-Bahrain relations. The two sides shared the view to continue to cooperate for strengthening their relationship.

5. Both sides also discussed the situation on North Korea. Prime Minister Abe requested understanding and cooperation on the early resolution of the abductions issue. In response, H.R.H. Prince Salman expressed his support for Japan’s position.

Page Top
Back to Japan-Bahrain Relations