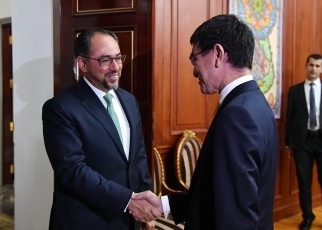 On May 18, commencing at 8:20 a.m. (local time) for approximately 25 minutes, Mr. Taro Kono, Minister for Foreign Affairs of Japan, during his visit to the Republic of Tajikistan, held a Japan-Afghanistan Foreign Ministers’ Meeting with H.E. Dr. Salahuddin Rabbani, Minister of Foreign Affairs of the Islamic Republic of Afghanistan. The overview of the meeting is as follows.

Page Top
Back to Japan-Afghanistan Relations