Signing of the Japan-UAE Investment Agreement 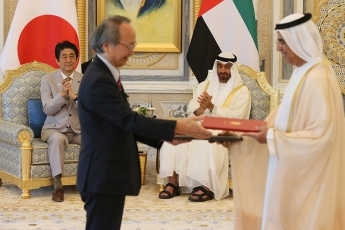 1. On April 30 (same day local time), H.E. Mr. Kanji Fujiki, Ambassador of Japan to the United Arab Emirates (UAE), and H.E. Mr. Obaid Humaid Al Tayer，Minister of State for Financial Affairs of the UAE, signed the “Agreement between Japan and the United Arab Emirates for the Promotion and Protection of Investment“ (the Japan-UAE Investment Agreement) and the exchange of signed text of the Agreement was witnessed by H.E. Mr. Shinzo Abe, Prime Minister of Japan and H.H. Sheikh Mohamed bin Zayed Al Nahyan, Crown Prince of Abu Dhabi and Deputy Supreme Commander of the UAE Armed Forces in Abu Dhabi, the UAE.

3. As the UAE embraces Dubai which is aiming to become the hub of the Middle Eastern regional economy and is actively inviting foreign enterprises, more than 300 Japanese companies has established their bases in the country. This Agreement is expected to ensure stable corporate activities of Japanese enterprises operating in the UAE as well as to contribute to further development of economic relations between the two countries.

4. The Contracting Parties will inform each other, of the completion of their respective internal procedures necessary for the entry into force of this Agreement (in case of Japan, the approval ot the National Diet will be required). This Agreement will enter into force on the thirtieth day after the date of the exchange of diplomatic notes.