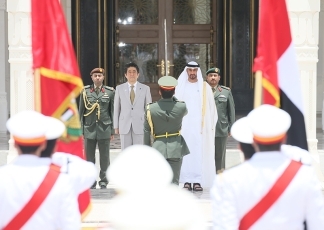 Commencing from 9:30 p.m. for approximately 20 minutes, Prime Minister Abe visited the memorial monument for the late Sheikh Zayed, the founding father and first president of the UAE, and received an explanation about the president's achievements, etc.

(A) Attendance at the Japan-UAE Business Forum

Commencing from 10:40 a.m. for approximately 15 minutes, Prime Minister Abe attended the Japan-UAE Business Forum, and in his speech he talked about further strengthening of the strategic partnership with the UAE going beyond the energy field and about cooperation in infrastructure, culture, education, and cutting-edge technology fields including space development, and he emphasized that he would advance promotion of Japan-made food products such as high-quality fruits and vegetables.
The participants in the economic mission accompanying Prime Minister Abe and many other people from the public and private sectors in Japan and the UAE participated in this forum, and held lively exchanges of views about infrastructure development, energy, space development, development of industries, and human resources development. Furthermore, a food tasting event and business talks were held for Japan-made food products such as fruits and vegetables.

Commencing from 12:10 p.m. for approximately one hour, Prime Minister Abe held a meeting with H.H. Sheikh Mohamed bin Zayed Al Nahyan, Crown Prince of Abu Dhabi at the Presidential Palace. Prime Minister Abe expressed deep gratitude for the recent renewal of the offshore concession rights of Japanese companies by the UAE, and both leaders agreed to further strengthen the strategic partnership of the two countries in a wide range of fields such as politics, defense, education, agriculture, cutting-edge technology, etc., in addition to energy and the economy. Furthermore, they issued the Joint Statement on Deepening and Strengthening Strategic Partnership between Japan and the United Arab Emirates - Opening a New Chapter of Cooperation towards Prosperity and Stability (PDF)

towards a future shared between the two countries.

Furthermore, on the occasion of this meeting, the "Agreement between Japan and the United Arab Emirates for the Promotion and Protection of Investment" (the Japan-UAE Investment Agreement) signed by H.E. Mr. Kanji Fujiki, Ambassador of Japan to the United Arab Emirates, and H.E. Mr. Obaid Humaid Al Tayer, Minister of State for Financial Affairs, was exchanged, witnessed by Prime Minister Abe and Crown Prince Mohammed of Abu Dhabi. Following on from this, commencing from 1:10 p.m. for approximately 40 minutes, Prime Minister Abe attended a luncheon hosted by Crown Prince Mohammed of Abu Dhabi.

Commencing from 2:50 p.m. for approximately 20 minutes, Prime Minister Abe visited the Sheikh Zayed Grand Mosque which is adjacent to the mausoleum of the founding father and first president of the UAE, the late Sheikh Zayed bin Sultan Al Nahyan (1918-2004) on the same site.

Commencing from 3:20 p.m. for approximately 10 minutes, Prime Minister Abe visited Wahat Al Karama (meaning "the oasis of dignity"), which consists of a monument inscribed with the names of the martyrs since the founding of the UAE, and laid a wreath for the martyrs.