An international donors’ conference on the reconstruction of Gaza was held in Cairo, Egypt on October 12, and State Minister for Foreign Affairs Yasuhide Nakayama attended from Japan. An overview of the conference is as follows.
Incidentally, this conference was hosted by Norway and Egypt, and over 90 countries and international organizations from around the world participated. 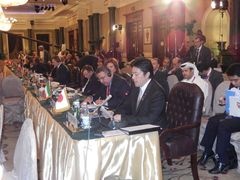 State Minister Nakayama gave the following speech at the conference.

Many of those attending the conference expressed concerns about the stalled Middle East peace negotiations and noted the importance of restoring Gaza under the Palestinian Authority, and the necessity for greater support for the economic and social stability of Palestine overall was reconfirmed. The total amount of assistance pledged by participating countries at this conference was approximately 5.4 billion US dollars.

Ahead of the conference, State Minister Nakayama held a meeting with H.E. Mr. Sameh Shoukry, Minister of Foreign Affairs of Egypt on October 11, and meetings with Dr. Mahmoud Abbas, President of the Palestinian Authority and Bruno Maçães, Secretary of State of Portugal on October 12. 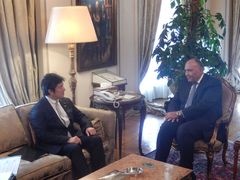 (1) In his meeting with Minister Shoukry, State Minister Nakayama said he appreciates Egypt's role in the region, including its hosting of this conference for the reconstruction of Gaza. Minister Shoukry said he appreciates Japan's role in tackling international problems such as the Middle East peace problem and the fight against terrorism, and said he hopes Japan and Palestine will cooperate and work together. The two ministers also discussed bilateral economic and business relations and increasing the frequency of mutual visits by VIPs. 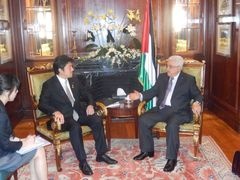 (2) In his meeting with President Abbas, State Minister Nakayama explained Japan's support for restoring Gaza, along with requesting that the Palestinian side also respond flexibly in order to move the Middle East peace process forward. President Abbas expressed gratitude for Japan's support for Palestine, and expressed expectation over the role Japan will perform in the Middle East problem going forward. 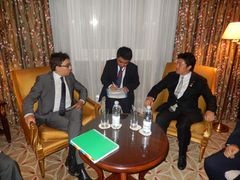 (3) In the meeting between Secretaty of State Maçães and State Minister Nakayama, the pair exchanged views on developing bilateral relations further, including mutual visits by VIPs, and strengthening economic relations in particular.