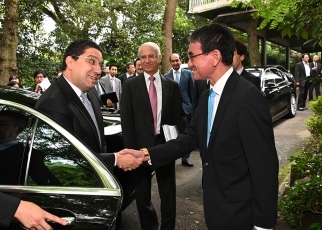 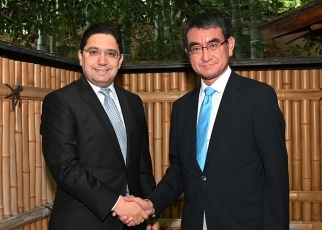 Mr. Taro KONO, Minister for Foreign Affairs of Japan, held a luncheon meeting with H.E. Mr. Nasser BOURITA, Minister of Foreign Affairs and International Cooperation of the Kingdom of Morocco, who is visiting Japan to attend the seventh Tokyo International Conference on African Development (TICAD7), commencing at 0:00 p.m. on August 31 for approximately 70 minutes. The overview of the meeting is as follows.

Minister Kono welcomed Minister Bourita’s visit to Japan and stated that he was grateful to meet again following last December. Minister Kono also stated that the attendance of Minister Bourita to TICAD7 on behalf of his Majesty the King is the proof of respect and friendship from Morocco to Japan, that Japan and Morocco have traditionally enjoyed good relations on the basis of the close relationship between the Imperial Family of Japan and the Royal Family of Morocco, and that the friendly relations based on the relationship of mutual trust are strong enough to overcome any difficulties. Minister Kono also stated that he had a strong will to strengthen the bilateral relations, given the fact that Morocco is one of the major countries in the Middle East and Africa. While stressing the importance of promoting economic exchange with Morocco as well as development cooperation, Minister Kono also stated that Japan would like to accelerate setting up legal frameworks to that end, and that Japan had consistently attached importance to “Intellectual and Human Contribution” and “Investment in ‘people’ ”, including ABE Initiatives.

In response, Minister Bourita expressed his congratulations on success of TICAD7, and stated that His Majesty the King himself also recognized Japan as an important partner, and that, taking this opportunity, he would like to further strengthen the partnership between both countries through advancing cooperation in various fields. Both ministers shared the view that they would continue to bolster bilateral relations. Minister Kono also requested that import restrictions on Japanese food products imposed after the Great East Japan Earthquake would be lifted at the earliest possible date.

2. Cooperation in the international area and regional affairs

Both ministers confirmed the importance of enhanced cooperation in the international arena, including UN Security Council, and exchanged views on the regional affairs, including the situation in the Middle East.

The luncheon was held in a cozy atmosphere, and both ministers celebrated the reunion for the fourth time following the Japan-Morocco Foreign Minister’s meeting held at the end of last year.