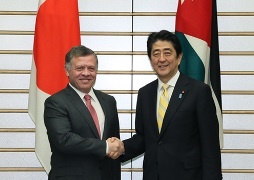 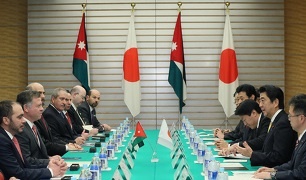 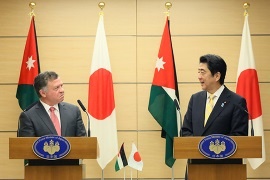 On November 20, commencing at 6:30 p.m. for approximately 45 minutes, Prime Minister Shinzo Abe held a Summit Meeting at the Prime Minister’s Office with His Majesty King Abdullah II Ibn Al Hussein, King of the Hashemite Kingdom of Jordan, who is paying a working visit to Japan. The overview of the meeting is as follows. Following the meeting Japan-Jordan Joint Statement (PDF)

Prime Minister Abe welcomed the progress in the cooperative relationship in various fields in the 60th anniversary year of the establishment of diplomatic relations, and expressed his intention to strive to further strengthen the relationship. He also said that Japan highly appreciates the role Jordan is playing for the peace and stability of the region, including its efforts to counter the Islamic State of Iraq and the Levant (ISIL) and its acceptance of over 600,000 Syrian refugees.

Prime Minister Abe explained that Japan will newly provide assistance totaling approximately 2.4 billion Japanese yen as Program Grant Aid for Environment and Climate Change “Project for Rehabilitation and Expansion of the Water Networks in Balqa Governorate” and as Non-Project Grant Aid for Provision of Japanese SME’s Products, for Jordan, which faces major burdens, including acceptance of Syrian refugees. King Abdullah expressed gratitude for the assistance extended to Jordan by Japan.

Prime Minister Abe explained Japan’s policy of contributing even more proactively to the peace and stability of the regional and international communities from the standpoint of “Proactive Contribution to Peace.” King Abdullah said he welcomes and supports this. The two leaders also mutually appreciated their respective activities in the field of PKOs, and shared the view that they will strengthen cooperation in this field.

The two leaders shared recognition that ISIL which is expanding and crossing national borders poses a major threat to international order, and a concerted effort by the international community is required in a wide range of fields, including dealing with fundraising and humanitarian crises. Prime Minister Abe said Japan highly appreciates the initiatives Jordan is taking to counter ISIL. King Abdullah said he highly appreciates Japan’s fight against terrorism, including humanitarian assistance for Iraq, Syria and neighboring countries.

Additionally, both leaders shared concerns about the situation in Syria, and shared recognition that a political transition through an agreement based on the Geneva Communiqué is urgently needed in order to restore stability and peace in Syria.

Both leaders shared concerns about the suspension of peace negotiations, and affirmed the need to promptly resume the negotiations in order to achieve a “two state solution.” Prime Minister Abe said he appreciates Jordan’s contribution to the Middle East peace issue, along with expressing gratitude for Jordan’s cooperation with Japan’s unique initiative, the “Corridor for Peace and Prosperity”. King Abdullah said he highly appreciates Japan’s support and the role it is performing in the Middle East peace process, including the “Corridor for Peace and Prosperity”.