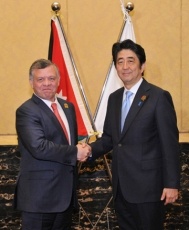 On April 22, commencing at 12:20 p.m. (Indonesia time. 2:20 p.m., April 22, Japan time) for approximately 50 minutes, Prime Minister Shinzo Abe, who is visiting Indonesia to attend the Asian-African Summit 2015 on the occasion of the Asian-African Conference Commemoration, held a working lunch with His Majesty King Abdullah II Ibn Al Hussein, King of the Hashemite Kingdom of Jordan. The overview is as follows.

At the beginning, Prime Minister Abe explained that he highly appreciates the role that Jordan is fulfilling in regional peace and stability, including the measures to contend with ISIL and accepting Syrian refugees. In addition, Prime Minister Abe once again conveyed his appreciation for the generous support extended by Jordan in the Terrorist Incident Regarding the Murder of Japanese, along with expressing his condolences over Cpt. Muath al-Kaseasbeh, an ISIL victim. Furthermore, Prime Minister Abe said that in order to return to a vibrant and stable Middle East, Japan will continue provide solid support to moderate Islamic countries such as Jordan that are contending with extremism on the front lines, and will materialize the concept of “the best way is to go in the middle” into practice. The two leaders shared the view that they will cooperate to further advance bilateral relations.

Prime Minister Abe expressed that taking into account a request from the Government of Jordan and the two countries’ amicable bilateral relations, the Government of Japan has decided to double the value of Development Policy Loan announced in January this year which will amount to $200 million. King Abdullah expressed his gratitude for this support from Japan.

The two leaders shared recognition that with regards to ISIL it will be important for countries to coordinate, leverage their respective strengths and maintain ongoing multi-faceted initiatives.
Prime Minister Abe said that Japan will steadily provide humanitarian assistance such as food and medical care to the Middle East, including Jordan, and will steadfastly fulfil its responsibilities in the international community, which is moving forward in the fight against terrorism.
The two leaders also exchanged views on the current situation in the Middle East, including Middle East peace, Yemen, Iran, Syria and Libya.