Video message by Foreign Minister Motegi, on the occasion of the kickoff event of “Tohoku-Israel Startup Global Challenge Program” 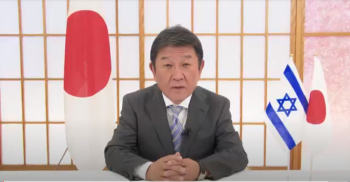 On July 28th, the kickoff event of “Tohoku-Israel Startup Global Challenge Program,” hosted by the Embassy of Israel in Japan and JETRO, was held in a hybrid format connecting a main venue at Sendai City, Miyagi Prefecture, and online guests and participants. On this occasion, Foreign Minister Motegi issued a video message as follows:

Let me first express my heartfelt congratulations for holding of this kickoff event for “Tohoku-Israel Startup Global Challenge Program.”

This year marks a decade since the Great East Japan Earthquake, and I would like to pray for the repose of the souls of the victims and extend my sincerest condolences to their bereaved families. Israel dispatched Medical Team to Japan ahead of any other government, and has continuously developed support programs to Tohoku region. I would like to take this opportunity to reiterate my appreciation for those supports.

With regard to the Tokyo Olympic Games having just began last week, I am glad to hear that Town of Watari in Miyagi Prefecture, designated as “ARIGATO Host Town for Supporting Reconstruction”, has spurred various exchanges, such as supportive activities for Israeli athletes. I believe that the Games will offer an opportunity for us to present how much recovery Japan has achieved since the disaster to Israeli people who have supported us a lot.

Today, Tohoku-Israel Startup Global Challenge Program kicked off in Sendai City, which pursues “the best startup-friendly city in Japan.” In order to promote local entrepreneurship, we cannot find more competent partner for this program than experts from Israel, recognized as “Silicon Valley of the Middle East” which has abundant knowledge about entrepreneurship.

I myself have a personal and strong attachment to Japan-Israel bilateral relations, out of my experience, as the first Japanese Minister of Economy, Trade and Industry to visit Israel in 2014. At that time, Prime Minister Naftali Bennett was Minister of Economy, and I was able to recognize the potential of Israeli economic growth in the field of advanced and information technology through frankly exchanging views with those who I met including the then Minister.

Both countries will commemorate the 70th anniversary of the establishment of diplomatic relations next year, in 2022. I will do my best to play an active role so that our bilateral bond will be further deepened.