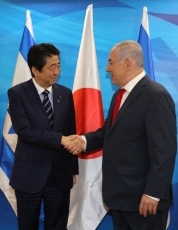 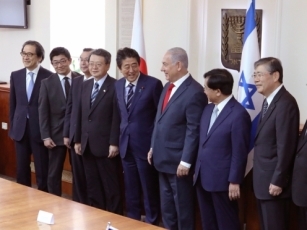 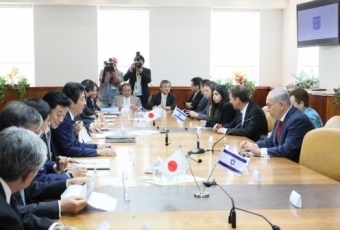 Photo: Cabinet Public Relations Office
On May 2nd, commencing at 12:05 p.m. for approximately 130 minutes, Mr. Shinzo Abe, Prime Minister of Japan, during his visit to Israel, held a summit meeting with H.E. Mr. Benjamin Netanyahu, Prime Minister of the State of Israel. The overview of the meeting is as follows.

On bilateral relations, the two leaders acknowledged that both countries face difficult security challenges, and while welcoming the development of economic relations, confirmed that the two countries in the future will deepen strategic cooperation in fields including political affairs and national security. From this perspective, the two leaders shared the view that the two countries will newly establish a joint foreign and defense consultation between both countries.
Prime Minister Abe stated that he appreciated Israel's national efforts aimed at dealing with rapidly evolving cyber threats, and the two leaders confirmed that the two countries will strengthen cooperation in cyberspace. The two leaders agreed that Japan will send government officials to visit Israel's cyber-security complex in Beer Sheva, Israel.
Prime Minister Abe stated that science and technology, which form the basis of cyber capabilities and innovation, are areas of strength for both Japan and Israel, and wished to see progress made in cooperation in various fields of research and development, to which Prime Minister Netanyahu agreed.
Further, Prime Minister Abe mentioned that the "Japan Israel Innovation Network (JIIN)" was launched last year, and stated that programs such as the sending of young entrepreneurs, holding of seminars and matching events in areas including cyber, innovation and biotechnology are being planned to take place.  In response, Prime Minister Netanyahu appreciated such efforts and stance by Japan, and stated that combining Japan's technology and Israel's innovation will open up wider possibilities, and wished to deepen cooperation in various areas.

On the Middle East Peace Process, Prime Minister Abe stated that Japan supported a two-state solution, that direct dialogue between the parties as well as the involvement of the United States are essential to the realization of peace, that Israel's constructive engagement is also important, and requested restraint on settlement activities.
Further, the two leaders discussed the "Corridor for Peace and Prosperity" initiative, and Prime Minister Abe welcomed the joint-decision on the construction of an access-road from the Jericho Agro-Industrial Park (JAIP) to the border with Jordan reached at the Ministerial-Level Meeting of the Four-Party Consultative Unit on April 29th, 2018, and requested the continued cooperation of Israel toward the early start of construction.
In response, Prime Minister Netanyahu welcomed Japan's commitment to the "Corridor for Peace and Prosperity" initiative, and stated that Israel will strengthen its own efforts toward the initiative, as well as mentioned the importance of dialogue between the parties for making progress in the Peace Process.

On the issue of North Korea, Prime Minister Abe explained Japan's positions, that the international community needs to examine closely North Korea's concrete actions and that the international community must not make errors on the timing of easing sanctions learning from lessons of the past. Furthermore, he stated that a nuclear-armed North Korea cannot be accepted, that maximum pressure must be maintained in order to achieve complete, verifiable, and irreversible dismantlement (CVID) of weapons of mass destruction (WMDs) and ballistic missiles and that the Middle East should not become a loop hole in sanctions. Finally he said that Japan will cooperate with Israel and will continue to call upon other nations to reconsider their relations with North Korea and to strengthen measures against attempts to bypass sanctions, and that Japan requests the understanding and cooperation of Israel toward the early resolution of the abduction issue.
In response, Prime Minister Netanyahu stated that Israel completely supports the position of Japan.

Following the above, an expanded summit meeting with the participation of representatives of major Japanese companies was held.

At the beginning, Prime Minister Abe stated that the economic relations of the two countries was developing at an exponential level.  Compared to the time the second Abe Administration started, the number of Japanese companies in Israel increased almost three-fold from 25 to 70, and Japanese investment in Israel increased from 1.1 billion yen to 130 billion yen, a 120-times increase.  The bilateral Investment Agreement has entered into force, and further expansion of relations was to be expected.

Further, he noted that in the summit meeting held earlier, he shared the view with the Israeli side on intentions to expand relations among private companies and mutual exchange of business persons through programs under the Japan-Israel Innovation Network (JIIN), a joint Government-Business platform, among others.

On the Red Sea Dead Sea Project, he noted that the project contributes to remedying shortages of water as well as confidence building in the region, and that Japanese companies were showing interest in the project, and that he looked forward to the smooth progress of the project.

Finally, he noted that high ranking representatives of Japanese companies with in-depth relations with Israel had accompanied him in his visit, and expressed his hope that these companies will become the flagbearers of expanded relations between Japan and Israel in the future.

In response, Prime Minister Netanyahu expressed his expectations for strengthened economic relationship between the two countries.

Prime Minister Abe also stated that he hoped that the Japanese companies which visited Israel in this trip will expand investment and projects in Israel and form a foundation for strengthening the bilateral relationship between Japan and Israel.