Meeting between Mrs. Akie Abe and Mrs. Sara Netanyahu, spouse of the Prime Minister of the State of Israel 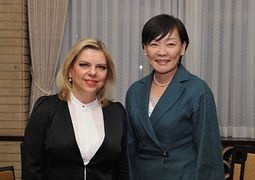 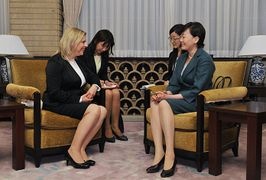 On May 12, 2014, Mrs. Akie Abe, the spouse of the Prime Minister of Japan, held talks with Mrs. Sara Netanyahu, the spouse of the Prime Minister of the State of Israel. Two ladies talked in friendly atmosphere.
Mrs. Abe welcomed Mrs. Netanyahu’s first visit to Japan in 17 years and Mrs. Netanyahu replied that she looked forward to re-visiting Japan very much.
Mrs. Abe thanked Israel for the support provided at the time of the Great East Japan Earthquake. Mrs. Netanyahu asked Mrs. Abe about Japan’s various support measures regarding natural disaster and Mrs. Netanyahu explained how her country extends support toward children in distress.
Mrs. Netanyahu said that she sensed many common points between Japan and Israel such as having historical scenery and modern technology.  During her visit to Japan, Mrs. Netanyahu visited Tokyo, Kamakura and Kyoto and had a chance to experience traditional Japanese culture. Her visit to Japan was a great opportunity to further deepening the friendship between Japan and Israel.