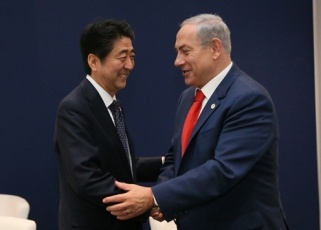 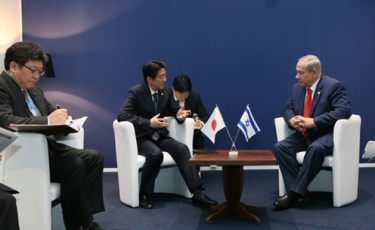 On November 30, commencing at 1:15 p.m. (France time) for approximately 40 minutes, Mr. Shinzo Abe, Prime Minister of Japan, held a summit meeting with H.E. Mr. Benjamin Netanyahu, Prime Minister of the State of Israel. The overview is as follows.

In response, Prime Minister Netanyahu expressed his view that he welcomed the progress made in bilateral relations that had become more active following both their visits.

Both leaders welcomed the continued dialogue between the two countries’ defense authorities and cyber-related officials. Prime Minister Abe explained that Japan’s “legislation for peace and security” will enable the country to contribute further to the peace and security of the international community. Prime Minister Netanyahu described this legislation as an historic achievement and expressed his congratulations and support for its establishment.

With regard to the bilateral economic relations that have developed significantly since the summit meeting held last year, both leaders affirmed the progress being made in research and development cooperation in the industrial field as well as in the negotiations toward a Japan-Israel investment agreement. Both leaders also welcomed the opening of the Israel Trade office in Osaka and affirmed that they would continue to support further development of bilateral economic relations.

Both leaders exchanged opinions on terrorism and the situation in Syria and confirmed cooperation toward achieving peace and stability in the region.

Prime Minister Abe expressed concerns about the recent chain of violence and called on the relevant parties to prevent the conflict from escalating any further and to cease settlement activities.