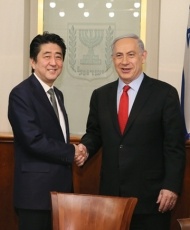 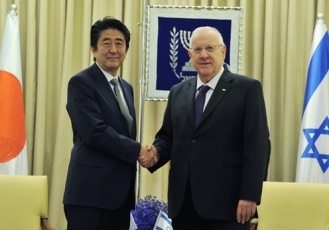 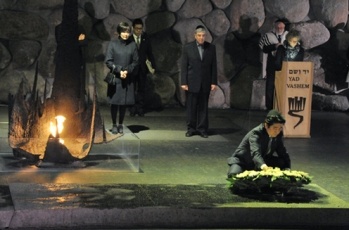 was issued following the meetings.

At the beginning, Prime Minister Abe conveyed his condolences over the Jewish casualties that resulted from a terrorist attack in Paris, and affirmed the need for ongoing efforts by the international community to contend with terrorism.

Politics and security
The two leaders welcomed the active exchanges taking place between their national security authorities and defense authorities, and expressed expectation over cooperation in the cyber field on which a bilateral dialogue was held in November last year.
Economic field
The two leaders expressed their appreciation for a shared view on cooperation on industrial R&D that was reached with the Israeli side when Japan's Minister of Economy, Trade and Industry visited Israel in July last year. The two leaders noted that progress is also being seen in cooperation and collaborations between individual companies, and shared the view that they will work to maintain this momentum. Prime Minister Abe welcomed the Plan to Strengthen Economic Ties and Cooperation with Japan that was decided on by the Government of Israel. Both sides shared the view that they will instruct working-level officials to aim to finalize investment agreement negotiations by the end of the year.
Strengthening science and technology cooperation
Both leaders welcomed that Japan Science and Technology Agency and Israeli Ministry of Science, Technology and Space have signed a Memorandum of Cooperation (MOC) and have agreed to implement a corroborative research program in the field of Information and Communication Technology.
People-to-people exchanges
The two leaders confirmed the importance of vitalizing people-to-people exchanges, including tourism, and expressed expectation that negotiations on introducing a Working Holiday Visa Program will be concluded promptly.

UN Security Council reform, Election of the non-permanent members of the Security Council
Prime Minister Abe pointed to the need for concrete action to reform the UN Security Council this year, which is the 70th anniversary of the establishment of the UN, and requested cooperation for achieving reform.
Nuclear disarmament and non-proliferation
Prime Minister Abe said that as the only country which has ever suffered from atomic bombings, Japan is placing importance on nuclear disarmament and non-proliferation this year, which is the 70th anniversary of the bombings. He expressed expectation that as a non-nuclear nation Israel will join the Non-Proliferation Treaty (NPT), promptly ratify the CTBT, and make further efforts to promptly hold an International Conference on Zone Free of weapons of mass destruction in the Middle East.

Middle East peace
Prime Minister Abe voiced concern about the chain of violence and mistrust since last summer, and requested that behavior that is likely to escalate the conflict be avoided. He strongly requested a review of the suspension of the return of tax revenues to the Palestinian Authority that is being implemented by Israel. Prime Minister Abe also requested a halt to settlement activities, which violate international law. Following on from a Summit Meeting in May last year, he expressed hope for greater cooperation by Israel on the "Corridor for Peace and Prosperity" initiative.
Middle East situation
Prime Minister Abe explained that Japan will implement new assistance totaling 200 million U.S. dollars as a measure for contending with ISIL. Additionally, in regard to the Iranian nuclear issue, Prime Minister Abe said Japan continues to seek a diplomatic solution, and emphasized that it will be important for the international community, including Israel, to support the EU3+3 framework and perform constructive roles in order to reach a final agreement during the negotiating period, which has been extended.

(7) Courtesy call from U.S. Senator John McCain and other Senetors

(Open a New Window)
Page Top
Back to Japan-Israel Relations