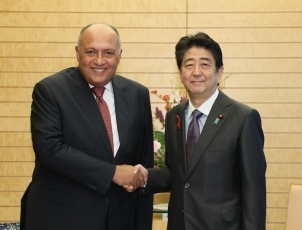 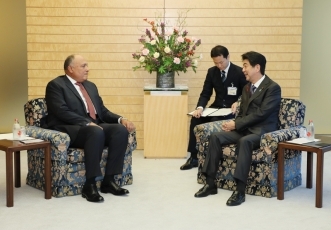 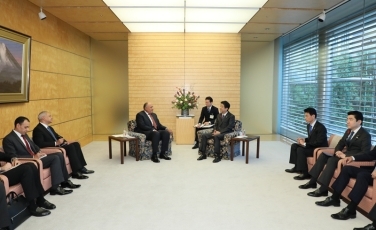 On October 5, commencing at 9:35 a.m. for approximately 20 minutes, Mr. Shinzo Abe, Prime Minister of Japan, received a courtesy call from H.E. Mr. Sameh Shoukry, Minister of Foreign Affairs of the Arab Republic of Egypt, during his visit to Japan. The overview of the courtesy call is as follows:

1. At the outset, Prime Minister Abe welcomed the visit of Minister Shoukry to Japan on the occasion of the Tokyo International Conference on African Development (TICAD) Ministerial Meeting. Prime Minister Abe stated that Egypt, a major power in the region, is an important partner for Japan for its diplomacy towards Africa, and that he would certainly like to receive the participation of H.E. Mr. Abdel Fattah El-Sisi, President of the Arab Republic of Egypt, at TICAD7 meeting next year. In response, Minister Shoukry stated that Japan-Egypt relations are strategic, and that he would like to work further toward strengthening bilateral relations. Minister Shoukry expressed gratitude for Japan’s cooperation related to African development and expects participation in TICAD7 next year by President El-Sisi as chair of the African Union.

2. In addition, Prime Minister Abe touched upon the favorable progress of the Grand Egyptian Museum project and the opening of 35 schools with a Japanese-style education model, and stated that he would like to further advance Japan-Egypt cooperation. In response, Minister Shoukry expressed gratitude for Japan’s support, stated that the Grand Egyptian Museum is a very important project for human civilization, that education is particularly important in wide-ranging cooperation between Japan and Egypt, and that he would like to continue to advance cooperation in the education field.