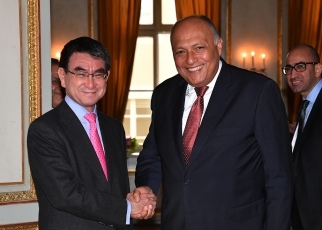 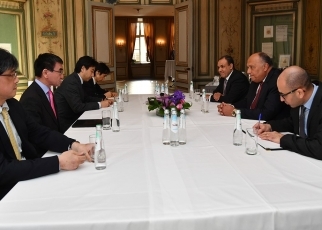 On February 15, commencing at 2 p.m. local time (10 p.m. Japan time) for approximately 40 minutes, Mr. Taro Kono, Minister for Foreign Affairs of Japan, during his visit to Munich to attend the Munich Security Conference, held a meeting with H.E. Mr. Sameh Shoukry, Minister of Foreign Affairs of the Arab Republic of Egypt . The overview of the meeting is as follows.

1. At the beginning, Minister Kono stated that he was happy to see Minister Shoukry again and that the Foreign Ministers’ Strategic Dialogue in October 2018 was beneficial. Minister Kono thanked the Government of Egypt for inviting, at the initiative of President El-Sisi, 27 high school students and others to Egypt from the prefectures affected by the 2018 heavy rain in western Japan, and hoped that the President would attend the G20 Osaka Summit and the Seventh Tokyo International Conference on African Development (TICAD 7).

2. In response, Minister Shoukry expressed his happiness that Japan-Egypt relations have further developed in a variety of areas in recent years. The Minister noted that President El-Sisi has high respect for Japan and Prime Minister Shinzo Abe, and that he seeks to further advance their bilateral cooperation. Minister Shoukry expressed appreciation for the assistance Japan has extended to Egypt as well as satisfaction with the current situation of the bilateral relationship.

3. The two ministers welcomed the progress of the bilateral cooperation on Japanese-style education based on the Egypt-Japan Education Partnership (EJEP) and cooperation on the Grand Egyptian Museum, and shared the view on further deepening the cooperation. With regard to TICAD 7, Minister Kono stated that Japan attaches importance to the role of Egypt as Chair of the African Union (AU), and the two ministers shared the view that they would work closely towards the success of TICAD 7. In addition, Minister Kono explained that Japan was considering the possibility of dispatching a few personnel of the Self-Defense Forces (SDF) as staff liaison officers to the Multinational Force and Observers (MFO) in response to the MFO’s request. Minister Shoukry welcomed that Japan began considering the dispatch of personnel, and stated that the MFO fulfills a critical and symbolic role for regional stability and that Japan’s contribution would advance the MFO’s role.