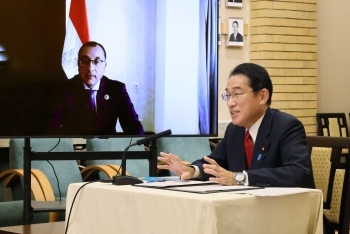 On August 27, commencing at 20:55 for approximately 25 minutes, Mr. Kishida Fumio, Prime Minister of Japan, held a video conference with H.E. Dr. Mostafa Madbouly, Prime Minister of the Arab Republic of Egypt, who is visiting Tunisia to attend the TICAD8. The overview is as follows: