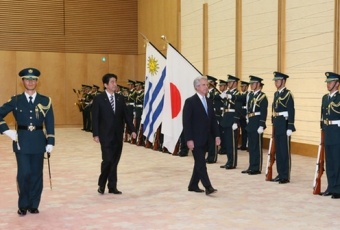 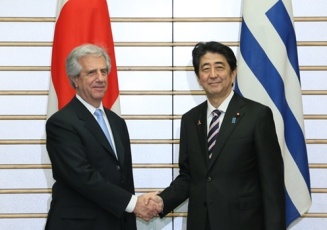 On November 6, commencing at 6:20 p.m. for approximately 40 minutes, Mr. Shinzo Abe, Prime Minister of Japan, held a summit meeting with H.E. Dr. Tabaré Ramón Vázquez Rosas, President of the Oriental Republic of Uruguay, who is making a working visit to Japan. (Attending on the Uruguayan side were Mr. Rodolfo Gustavo Nin Novoa, Minister of Foreign Affairs, Mr. Danilo Astori, Minister of Economics and Finance, and others. Attending on the Japanese side were Mr. Hiroshige Seko, Deputy Chief Cabinet Secretary, and others). A joint press occasion took place following the summit meeting. The overview is as follows. 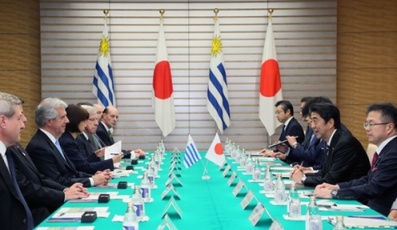 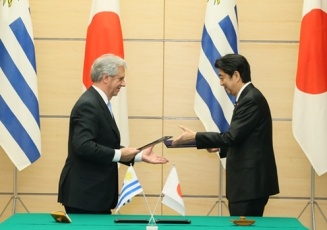 1. At the beginning of the summit meeting, Prime Minister Abe welcomed President Vázquez to Japan, and stated that Uruguay is a stable democratic country that traditionally adopts free and open policies, and is an important partner in South America.

2. In response, President Vázquez thanked Prime Minister Abe for the invitation to Japan, and expressed Uruguayan citizens’ gratitude for the friendly relationship Uruguay enjoys with Japan, which has spanned many years. President Vázquez also expressed his hope that a ban on importing fresh beef produced in Uruguay to Japan will be lifted promptly.

(1) Prime Minister Abe emphasized Uruguay’s geographical importance as the distribution hub of the South American region, and expressed his expectation over support for Japanese companies setting up businesses in the country. The two leaders shared the view that they will work together to increase bilateral trade and investment.

(2) Prime Minister Abe stated that Japan will further strengthen initiatives for global peace, stability and prosperity from the perspective of “Proactive Contribution to Peace” based on the principle of international cooperation, and explained Japan’s Legislation for Peace and Security. In response, President Vázquez valued the consistent posture of Japan as peaceful nation during the last 70 years of post-war and its commitment for the world peace, including its further contribution to the UN PKO operations.

4. Cooperation in the International Arena

The two leaders expressed mutual congratulations on both countries serving as non-permanent members of the United Nations Security Council (UNSC) at the same time, in 2016 and 2017, and shared the view that they will continue to work together on UNSC reform. President Vázquez mentioned that Uruguay will support Japan to be a permanent actor of the UNSC.

5. In addition, the two leaders exchanged views on diverse fields, such as the current international situation, including East Asia, the World Trade Organization (WTO), and environmental issues.

6. Following the meeting, the two leaders released a joint declaration in order to confirm that the historical and friendly relations that exist between the two countries will be strengthened further, including cooperation in a variety of fields such as politics, the economy and culture.

7. At a dinner held following the meeting, an exchange of views on a broad range of topics, including Japan-Uruguay relations, took place in a very relaxed atmosphere. 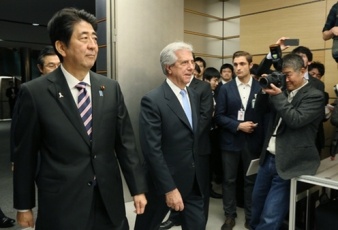 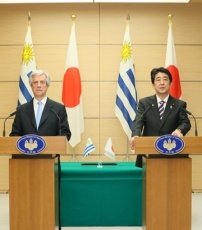