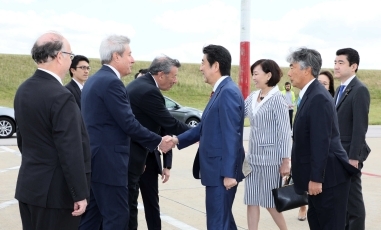 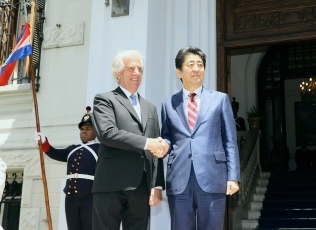 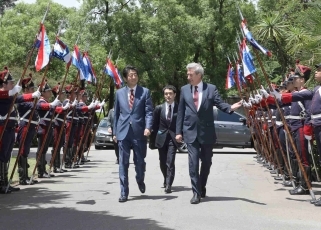 In addition, Measures for Strengthening the Relationship toward the 100th Anniversary of the Diplomatic Relations in 2021(Fact Sheet(PDF) 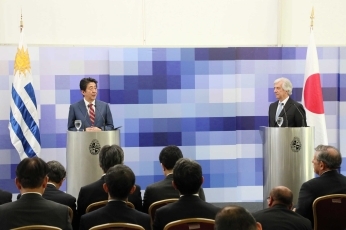 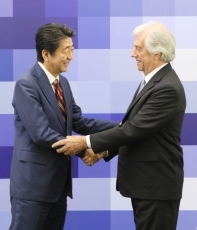 Photo: Cabinet Public Relations Office
On December 2, commencing at around 11:50 a.m. (local time; around 11:50 p.m. on December 2, Japan time) for approximately 50 minutes, Prime Minister Abe held a meeting with H.E. Dr. Tabaré Ramón Vázquez Rosas, President of the Oriental Republic of Uruguay, at the official residence of the President.

Prime Minister Abe and his wife attended a lunch hosted by President Vázquez at the official residence of the President.

Prime Minister Abe gave a greeting at the talks in which he expressed gratitude at being able to visit Uruguay this memorable year, which is the 110th anniversary of Japanese migration to Uruguay, along with stating that the Japanese who migrated to Uruguay have overcome difficulties and hardship and are flourishing in a variety of fields. In addition, Prime Minister Abe noted that the Japanese Association in Uruguay celebrated its 50th anniversary last year, and is making efforts to pass on and spread Japanese culture, including Japanese language education. Prime Minister Abe expressed deep appreciation to all members of the Nikkei community, who as "bridges" between Japan and Uruguay are fostering friendships between the two countries.

Ms. Senda stated that this visit by Prime Minister Abe is a historic day for Uruguay's Nikkei community, and expressed deep appreciation for the visit. She explained that the Nikkei community intends to contribute to the further advancement of the bilateral relationship as exemplary citizens, and to live up to the name of Japan, their native country.