On January 7, commencing at 6:30 p.m. local time (6:30 a.m. on January 8 Japan time) for approximately one hour, Mr. MOTEGI Toshimitsu, Minister for Foreign Affairs of Japan, who is currently visiting Paraguay, held a meeting with H.E. Mr. Federico González, Minister of Foreign Affairs of the Republic of Paraguay. Following this, at 7:45 p.m., (7:45 a.m. on January 8 Japan time), he paid a courtesy call on H.E. Mr. Mario Abdo Benítez, President of the Republic of Paraguay, for 40 minutes. The overview of each meeting is as follows. In addition, on his arrival in Paraguay, Minister Motegi also received greetings from representatives of the Nikkei（Paraguayans of Japanese decsent）community and others.

Minister Motegi valuedthat Paraguay attaches particular importance to fundamental values such as democracy that the two countries share, and noted that the activities of the Nikkei community and the support of the Japanese government have contributed greatly to the country’s development. Taking these into account, both countries concurred on strengthening cooperation to maintain and strengthen a free and open international order based on the rule of law as well as developing deeper and broader bilateral relations in a variety of areas, including infrastructure, science and technology, and the economy. 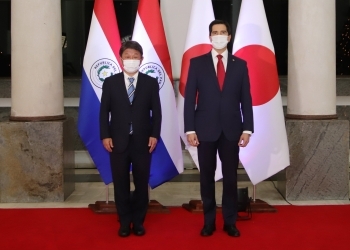 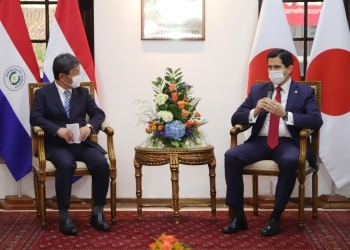 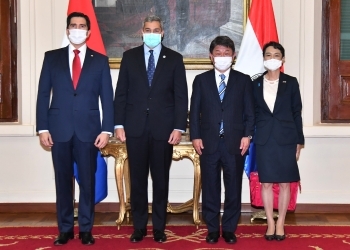 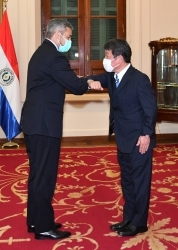 Page Top
Back to Japan-Paraguay Relations