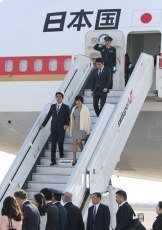 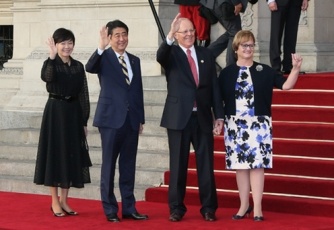 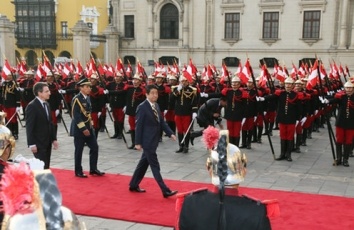 Photo: Cabinet Public Relations Office
Mr. Shinzo Abe, Prime Minister, paid an official visit to the Republic of Peru, the host country for the 24th Asia-Pacific Economic Cooperation (APEC) Economic Leaders’ Meeting, from Friday, November 18 to 19. An overview of the main bilateral events on November 18 is as follows. 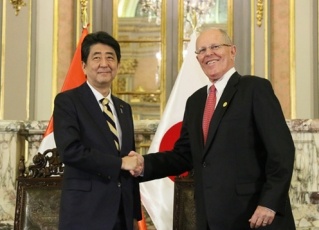 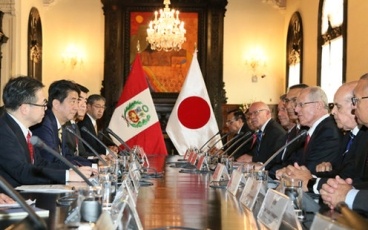 (1) At the beginning, President Kuczynski expressed his gratitude for the official visit by Prime Minister Abe, along with explaining that he hopes to further strengthen the relationship between Peru and Japan, which have a long diplomatic relationship.

(2) Prime Minister Abe expressed his gratitude for the invitation to make the official visit, along with stating that he is convinced APEC Peru 2016 will be a great success, and Japan will spare no efforts to cooperate.
Furthermore, Prime Minister Abe pointed out that among countries in the Latin America region, Japan's diplomatic relationship with Peru is the longest, and Japan and Peru are important partners that share fundamental values such as liberty, democracy, human rights and the rule of law. In the interests of further advancing this bilateral relationship, the two leaders shared views on the following points: (3) Additionally, Prime Minister Abe welcomed the infrastructure development and liberal and open economic policies that President Kuczynski will promote, along with explaining that Japan will further advance the cooperative relationship in a broad range of fields including infrastructure, information and communications technology (ICT), disaster risk reduction measures, environmental measures and education.

(4) The two leaders also held a broad exchange of views on the challenges facing the international community.

Prime Minister Abe explained the recent situation in East Asia, and also expressed the view that maintaining freedom of navigation and adherence to the rule of law are essential to ensuring the peace and security of the region and the international community. In particular, the two leaders exchanged views on the importance of maintaining freedom of navigation and overflight at seas and respecting the rule of law in order to ensure regional peace and security. 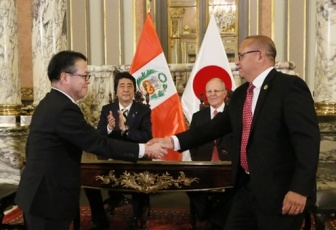 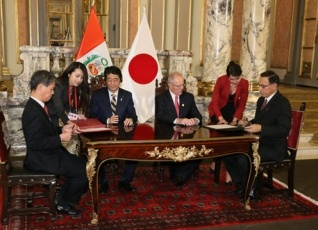 The two leaders also issued a joint statement consolidating their broad vision for further strengthening the cooperative relationship between the two countries in a bilateral context as well as in the international arena.

Prime Minister Abe attended a banquet hosted by President Kuczynski at the Government Palace. Prime Minister Abe explained that Peru was the first country in Latin America that Japan built a diplomatic relationship with, along with stating that he finds it deeply moving to be able to visit Peru half a century after his grandfather, Mr. Nobusuke Kishi, then Prime Minister, became the first Japanese Prime Minister to visit the country. The two leaders expressed their determination to make efforts to further advance the Japan-Peru relationship.

5.Visit to the Japanese Peruvian Association 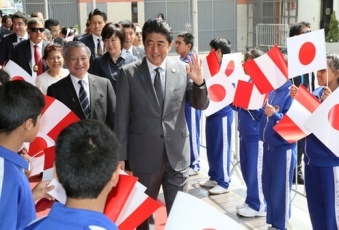 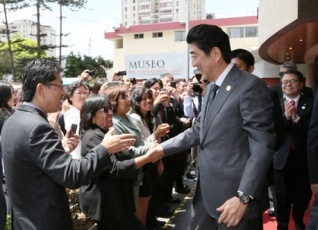 (1) Prime Minister Abe and his wife were welcomed by Mr. Jorge Kunigami, President of the APJ, students from the Japanese school in Lima (Asociación Academia de Cultura Japonesa), and children of Japanese descent, and then attended a welcome party at the Japanese Peruvian Cultural Center (Centro Cultural Peruano Japonés).

(2) At the outset, President Kunigami spoke on behalf of Peruvians of Japanese descent and expressed thanks for Prime Minister Abe’s visit and the support extended by the Government of Japan thus far. President Kunigami also explained that Peruvians of Japanese descent feel proud to have roots in Japan, and will offer their utmost cooperation for strengthening friendly relations between Japan and Peru.

(3) Prime Minister Abe explained that Japanese nationals feel proud of the excellent reputation cultivated by Peruvians of Japanese descent, a community with strong bonds of solidarity. Prime Minister Abe noted that 2019 will mark the 120th anniversary of the systematic immigration of Japanese nationals to Peru, and he expressed the view that as the “Japan-Peru Friendship Year” it will be a commemorative year for deepening exchanges between the two countries. 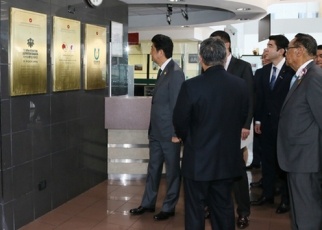 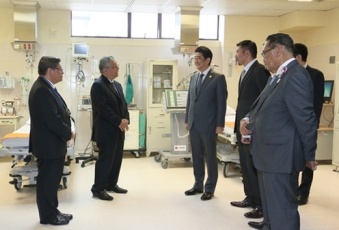 Photo: Cabinet Public Relations Office
After visiting the APJ, Prime Minister Abe paid a short visit to the Japanese Peruvian Centennial Clinic (Clinica Centenario Peruano Japonesa), a hospital established in commemoration of the 100th anniversary of the Japanese immigration to Peru, and operated by the APJ.

Page Top
Back to Japan-Peru Relations