Visit by Prime Minister Abe to the Republic of Colombia 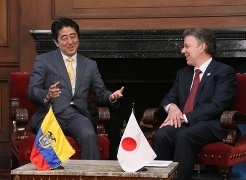 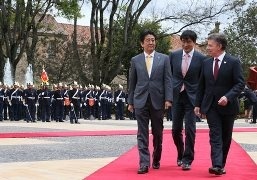 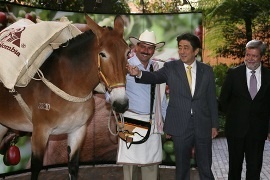 Photo: Cabinet Public Relations Office
From July 28 through 30, Prime Minister Shinzo Abe visited the Republic of Colombia and participated in events in Bogotá. The overview of the outcomes of this visit is as follows. (This was the first visit of the Prime Minister of Japan to Colombia.) 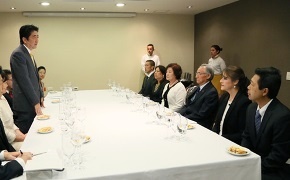 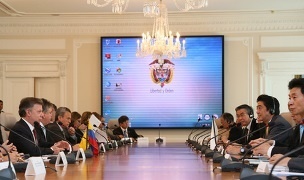 Photo: Cabinet Public Relations Office
(1) Opening statement
President Juan Manuel Santos welcomed this visit by Prime Minister Abe to Colombia, the first such visit by the Japanese Prime Minister, and stated that he feel a sense of connection between the visits to Colombia made over three generations by Former Prime Minister Nobusuke Kishi, Former Foreign Minister Shintaro Abe, and the current Prime Minister Shinzo Abe. He added that he believed this visit held historical significance. In addition, President Santos then stated that Colombia considers Japan to be a country of great importance that shares values such as democracy and basic human rights with Colombia.
Prime Minister Abe expressed his appreciation for the welcome by President Santos, and congratulated President Santos for his reelection (He will be inaugurated for his second term  on August 7 this year). Prime Minister Abe also mentioned the football match between Japan and Colombia during the recent FIFA World Cup tournament, and expressed some words of affection towards Colombia. Moreover, he praised the significantly improved security situation in Colombia in recent years and that the country's economy has been developing steadily.
(2) Bilateral cooperation
Prime Minister Abe stated that, based on the increasingly close relations between Japan and Colombia, he would like to promote regular high-level bilateral policy dialogues between the two countries hereafter, and President Santos expressed his approval for this proposal.
During the latter half of the meeting, Colombia's Minister of Foreign Affairs, Minister of Finance and Public Credit, Minister of Culture, Minister of National Education, and other officials from the Colombian side joined the talks, and they introduced the track record of Japan's assistance in their respective fields, and expressed their appreciation for it. They also gave specific proposals for future projects. The Minister of Culture showed a short video about a local library that was constructed with assistance from Japan. This video included a gratitude message for Prime Minister Abe from local children, and Prime Minister Abe was then presented with a letter of gratitude from a girl who is making use of the library.
(3) Economy
President Santos stated that Colombia has placed a high priority on strengthening relations with countries in the Asia Pacific region including Japan.
Prime Minister Abe commented that the CEOs and other members of numerous Japanese companies are accompanying him on this visit to Colombia, and that this reflects the increasing interest of companies in Colombia, which has been going through dynamic changes. Prime Minister Abe requested cooperation from President Santos in providing a good investment environment for Japanese companies, and expressed his expectation for the early completion of internal procedures in Colombia about the Bilateral Investment Treaty between Japan and the Republic of Colombia signed when President Santos visited Japan in 2011. Furthermore, Prime Minister Abe called for the acceleration of negotiations for the Japan-Colombia Economic Partnership Agreement (EPA), which is currently under negotiation, and expressed his expectation for an early conclusion of this agreement.
President Santos stated that he intends to further promote trade and investment relations with Japan, including the acceleration of the EPA negotiations.
In the second half of the meeting, five representatives of Japanese private sector companies attended the meeting, and praised Colombia for its good business environment, and expressed their strong expectation for the early conclusion of EPA negotiations.
(4) Cooperation in the international arena
The two leaders exchanged opinions concerning cooperation in a variety of fields in the international arena. Prime Minister Abe called for Colombia's participation in the Security Council reform, formulation of the Post-2015 Development Agenda, initiatives to address climate change, and the United Nations World Conference on Disaster Risk Reduction, which will be held in Japan in March 2015. President Santos stated that Colombia would like to deepen cooperation with Japan in fields in which Japan is demonstrating leadership, such as environmental initiatives and measures to address climate change.
(5) Sports exchanges and active roles of women in society
Prime Minister Abe stated that the Government of Japan is promoting "Sport for Tomorrow", a policy of contributing international community through sports in preparation for the Olympic and Paralympic Games in Tokyo in 2020. He explained that as part of this project, Japan has recently given 100 judo uniforms to Colombia's Sports Agency, and President Santos expressed his approval for promoting between the two countries in the area not only of economics but also of sports and culture.
Prime Minister Abe explained that Japan places the active role of women at the core of its growth strategy, based on the perspective of utilizing capabilities of women for economic growth, and stated that he would like to cooperate with Colombia towards realization of a "society in which women shine."
(6) Regional and international situation
Prime Minister Abe explained the views of Japan toward the situation in the Latin American region, Japan's policy of serving as a "Proactive Contributor to Peace", and the situation in East Asia, including issues related to North Korea. President Santos pointed out that Colombia has been experiencing domestic conflicts over a long period of time that have involved military force, therefore he is deeply aware of the importance of peace. He then expressed his support for Prime Minister Abe's initiatives aimed at achieving peace and stability in specific regions and the international community, including the policy of serving as a "Proactive Contributor to Peace." 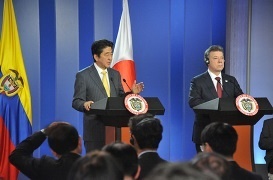 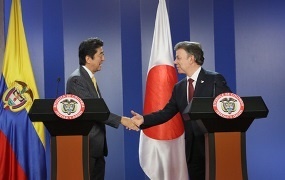