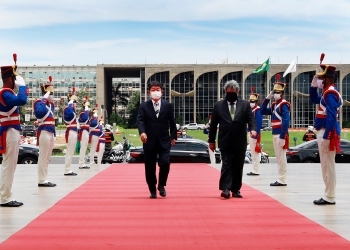 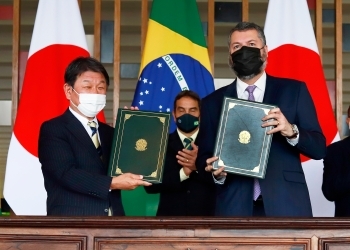 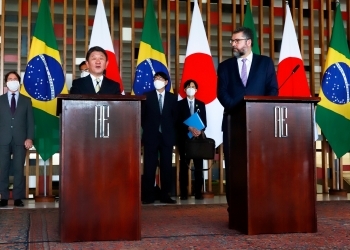 On January 8, commencing at 11:00 a.m. local time (same day, 11:00 p.m. Japan time) for 40 minutes, Mr. MOTEGI Toshimitsu, Minister for Foreign Affairs of Japan, who is currently visiting Brazil, paid a courtesy call to H.E. Mr. Jair Bolsonaro, President of the Federative Republic of Brazil. In the afternoon of the same day (January 9 at 12:00 a.m. Japan time), in between the the joint press occasion and the memorandum-signing ceremony, Mr. Motegi held a meeting with H.E. Mr. Ernest Araujo，Minister of Foreign Affairs of the Federative Republic of Brazil, for three hours. An overview of these events is as follows.

During his current visit to Brazil, Minister Motegi reaffirmed the fundamental values and traditional ties based on the Nikkei (Brazilians of Japanese descendants) community that Japan shares with the Bolsonaro administration, which is advancing a new diplomacy emphasizing cooperation with Japan and the United States while undertaking various reforms. Furthermore, as Strategic Global Partners that pursue cooperation not only bilaterally but also in the international arena, both sides concurred on strengthening cooperation to preserve and reinforce a free and open international order founded on the rule of law and further develop the relationship between the two countries in numerous areas, such as the economy, the environment, and people exchanges. 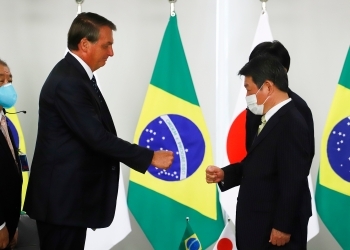 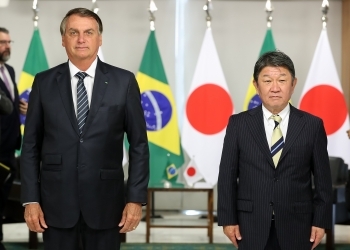 Photo: Marcos Correa/PR
(1) At the outset, Minister Motegi stated the increasing importance of cooperation with Brazil, which shares fundamental values and traditional ties based on the Nikkei community , as well as being Strategic Global Partners that pursue cooperation not only bilaterally but also in the international arena . He also expressed that he would like to use his visit as an opportunity to further strengthen Japan-Brazil relations. In response, President Bolsonaro welcomed Minister Motegi to Brazil and stated he would like to take this opportunity to further strengthen Japan-Brazil relations. He further expressed his respect for Japan’s efforts toward hosting the Tokyo Olympics and Paralympics and his strong support for the holding of the Games.

(2) Minister Motegi praised the various reforms enacted by President Bolsonaro and said that further improvement of the business environment is essential to maintain and encourage investments from Japanese companies. In response, President Bolsonaro said he would like to make further efforts to improve the business environment for Japanese companies in order to bolster Japan-Brazil economic relations.

(3) Minister Motegi explained Japan’s efforts for realizing a Free and Open Indo-Pacific (FOIP) and stated that Japan would like to cooperate to realize a free and open international order based on the rule of law. President Bolsonaro expressed his support and willingness to cooperate. In addition, Minister Motegi called for understanding and cooperation in swiftly resolving the abductions issue and obtained the understanding of President Bolsonaro. 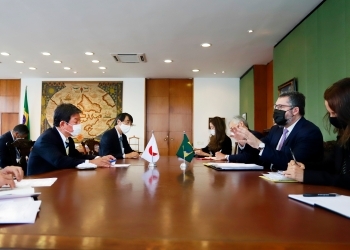 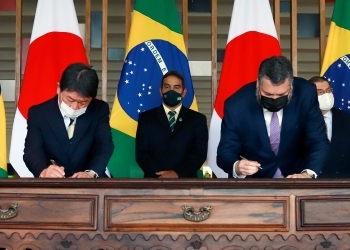 (1) At the outset, Minister Araujo welcomed Minister Motegi to Brazil and expressed that Brazil would like to cooperate with Japan, which shares the same values of democracy and freedom, as a Strategic Global Partner in building a free and open international order under a long-term perspective. Minister Motegi responded that he was happy to be visiting Brazil for the first time since his appointment to Minister for Foreign Affairs and to be able to meet in person despite the spread of the novel coronavirus disease (COVID-19). He stated that both countries share a common perspective and that he would also like to take his current visit as an opportunity to work further to advance concrete initiatives.

(2) Minister Motegi mentioned the history of contributions to the development of Brazilian industry through Japanese agricultural development and large-scale investments. He indicated his hope that the pension and tax reform efforts of the Bolsonaro administration would lead to improvements in the business environment for Japanese companies operating in Brazil and stated that Japan would like to promote cooperation in a wide range of fields, such as the digital economy, the environment, and legal assistance.

(3) In response, Minister Araujo said that Brazil, which is striving to join the OECD, is working to improve its business environment, including through regulatory reform. He expressed that he would like to continue to cooperate in the future in a wide range of areas and that Brazil’s approach to these reforms would contribute to the preservation and reinforcement of a free and open international order. He also stated that Brazil would like to advance these reforms with Japan’s cooperation.

(4) Both ministers reaffirmed that they would strengthen cooperation on international challenges, including the United Nations Security Council reform and the WTO. They exchanged opinions on the Free and Open Indo-Pacific (FOIP), the situation in Asia, such as the, North Korea, the Republic of Korea, and the East and South China Seas, as well as the situation in the Americas, including the start of the new Biden administration in the United States and the situation in Venezuela. They concurred on cooperating to realize a free and open international order based on the rule of law, including by utilizing the Japan-U.S.-Brazil Exchange launched last November to continue cooperation with the United States.

(5) In addition, as a tangible outcome of the cooperation between the two countries, both ministers signed the “Memorandum of Cooperation Regarding the Production and Use of Niobium and Graphene” and the “Tomé-Açu Memorandum of Cooperation Regarding Sustainable Use of the Amazon Region’s Biodiversity.” These memoranda are expected to further promote cooperation between Japan and Brazil regarding the production of niobium and graphene as well as the development of new products, in addition to the two countries’ cooperation pertaining to sustainable use of the agroforestry system and biodiversity of the Amazon region.