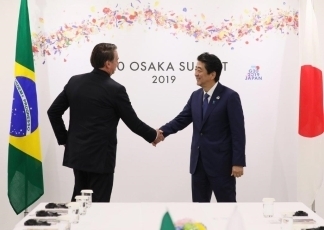 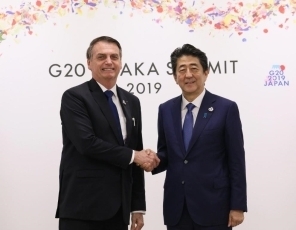 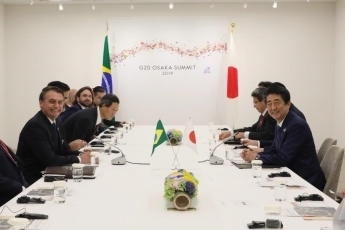 On June 29, commencing at around 12:00 p.m. for approximately 15 minutes, Mr. Shinzo Abe, Prime Minister of Japan, held a Summit Meeting with H.E. Mr. Jair Bolsonaro, President of the Federative Republic of Brazil, during his visit to Japan to attend the G20 Osaka Summit. The overview of the meeting is as follows.

[Reference 1] Japan-Brazil Meeting for Cooperation on Infrastructure Improvements
With the aim of promoting the introduction of Japanese quality infrastructure in Brazil, the first meeting was held in August 2017 attended by members of both the public and private sectors of the two countries. The third meeting was held on June 11, 2019. From Japan, the meeting was attended by governmental agencies, such as the Ministry of Foreign Affairs; Ministry of Economy, Trade and Industry; Ministry of Land, Infrastructure, Transport and Tourism; Ministry of Internal Affairs and Communications; and Japan International Cooperation Agency; and many Japanese companies.
[Reference 2] Japan-Brazil Joint Committee for Promotion of Trade, Investments and Industrial Cooperation
The Joint Committee was established in 2008 as a forum where the Japanese business community may raise business environment issues to the Government of Brazil for promoting trade and investment. It is comprised of members headed by the vice ministers of the Ministry of Economy, Trade and Industry of Japan and the Ministry of Economy of Brazil.