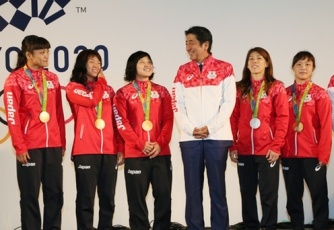 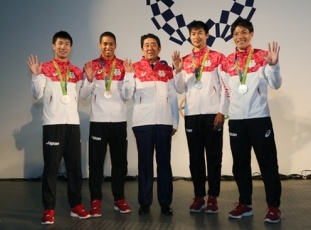 (1)Mr. Shinzo Abe, Prime Minister of Japan, visited Rio de Janeiro (the Federative Republic of Brazil) to attend the closing ceremony for the Games of the XXXI Olympiad on August 21.

(2)On the morning of August 21, Prime Minister Abe visited Tokyo 2020 JAPAN HOUSE and held an exchange with the Japanese Olympic team. Prime Minister Abe praised the strenuous efforts of each athlete, and conveyed his gratitude for the dreams and hope their single-hearted performances gave Japanese citizens.

(3)Following the exchange with the Japanese Olympic team, Prime Minister Abe received a courtesy call from Mr. Thomas Bach, President of the International Olympic Committee (IOC), and held a meeting with him for approximately 20 minutes.

Japan's presence as the host country for the next Summer Olympic and Paralympic Games was enhanced as a result of Prime Minister Abe's attendance at this closing ceremony. Prime Minister Abe's visit is also expected to contribute to the success of the 2020 Tokyo Games.