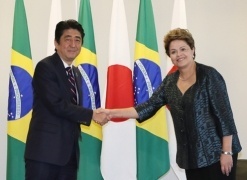 The two leaders confirmed that they would hold commemorative events in order to further strengthen and deepen bilateral relations on the occasion of the 120th anniversary of the establishment of diplomatic relations in 2015. In addition, Prime Minister Abe introduced that the Government of Japan will implement the “Sport for Tomorrow”; a program of international contribution via sports, towards the 2020 Olympic and Paralympic Games in Tokyo. The two leaders shared the view that the experiences and knowledge of the Rio 2016 Olympic Games would be connected to the Tokyo 2020 Olympics Games. The leaders also decided to build a Strategic and Global Partnership on the occasion of this visit, raising bilateral relations to higher level, and to establish regular dialogues between Foreign Ministers in order to further solidify this partnership.

The leaders exchanged views widely on deepening and expanding bilateral economic relations in the fields of shipbuilding, infrastructure improvement, oil and gas development and health. Prime Minister Abe supported entries into Brazil by Japanese companies, which possess sophisticated technologies and experience by encouraging the introduction of the Logistic Hub System being proposed by Japanese shipbuilding and maritime transportation companies, proposing the establishment of a bilateral public-private dialogue in order to improve Brazil’s grain transportation, and requesting pharmaceutical regulations in Brazil to be more efficient. President Rousseff explained that abundant business opportunities exist in the fields of infrastructure improvement and energy, and expressed strong expectations for Japanese companies to further invest in wide-ranging fields in Brazil.

4. Science, technology and innovation and education

The leaders, in order to strengthen bilateral relations with greater width and increased depth, exchanged views on promoting cooperation in the fields of space and marine, accepting distinguished Brazilian students via the “Science Without Borders” program, enhancing Japanese language education in Brazil, and accelerating women’s participation. Prime Minister Abe expressed his intention to accept about 900 trainees over the next three years with a view to promoting cooperation through capacity building.

The two leaders exchanged views on cooperating in the international arena, such as the United Nations and the G20, and shared the view that they would pursue cooperation toward achieving Security Council reform and constructing a new international framework for climate change etc.

Prime Minister Abe, from the standpoint of the “proactive contribution to peace” policy, based on the principle of international cooperation, explained the security policy and the policy of developing seamless security legislation which has been recently decided by the Cabinet. Prime Minister Abe also explained Japan’s fundamental position concerning Japan-China relations and the conditions of North Korea problems. President Rousseff explained the situation in Latin America.