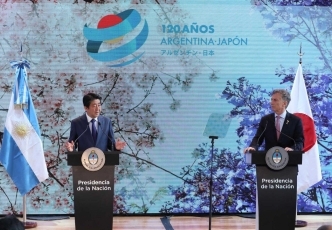 Photograph of the Prime Minister delivering his remarks at
the closing ceremony of the 120th Anniversary of
the Establishment of Diplomatic Relations between
Japan and Argentina
(Photo: Cabinet Public Relations Office)

On December 1, Mr. Shinzo Abe, Prime Minister of Japan, during his visit to the Argentine Republic to attend the G20 Buenos Aires Summit, held a meeting commencing at 4:15 p.m. (local time; 4:15 a.m. on December 2, Japan time) for approximately 20 minutes with H.E. Mr. Mauricio Macri, President of the Argentina Republic, followed by a signing ceremony for the Japan-Argentina Investment Agreement. After that, Prime Minister Abe attended a closing ceremony for the 120th anniversary of the establishment of diplomatic relations between Japan and Argentina. The overview is as follows.

(Open a New Window)
Page Top
Back to Japan-Argentina Relations