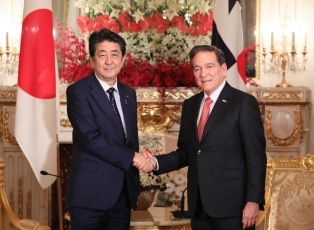 On October 24, commencing at 6:35 p.m. for approximately 20 minutes, Mr. Shinzo Abe, Prime Minister of Japan, held a Summit Meeting with H.E. Mr. Laurentino Cortizo Cohen, President of the Republic of Panama, who is visiting Japan. The overview of the meeting is as follows. The meeting was also attended by Mr. NISHIMURA Akihiro, Deputy Chief Cabinet Secretary, Mr. HASEGAWA Eiichi, Special Advisor to the Prime Minister, Mr. HAYASHI Hajime, Assistant Chief Cabinet Secretary, and others from the Japanese side, and by H.E. Mr. Carlos Pere, Ambassador-Designate of Panama to Japan, H.E. Mr. Jose Rojas, Minister for the Facilitation of Private Investments of the Presidency, and others from the Panamanian side.

Prime Minister Abe welcomed President Cortizo’s first visit to Japan as President, stating, “I would like to take this opportunity to once again congratulate you on assuming the presidency in July.”

President Cortizo expressed his sympathy to those affected by Typhoon Hagibis.

Prime Minister Abe went on to note that, “Since Japan is one of the main users of the Panama Canal, the commencement of operation of the expanded Panama Canal in 2016 has further increased Panama’s importance for Japan from the perspective of energy security,” and that, “Japan hopes to continue close consultations from the viewpoint of ensuring the environment for the use of the Panama Canal.” Furthermore, Prime Minister Abe stated, “With regard to the Panama Metro Line 3 project, I look forward to your leadership for the early commencement of the construction work in order to meet the expectations of the people of Panama.” President Cortizo responded that the Panama Metro Line 3 project supported by Japan is high in priority.

The two leaders also exchanged views regarding the situation in East Asia.