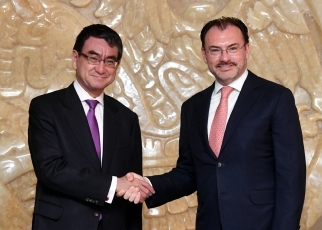 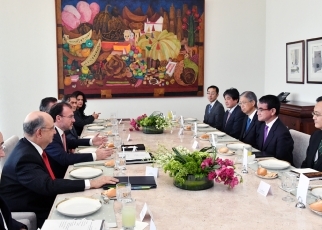 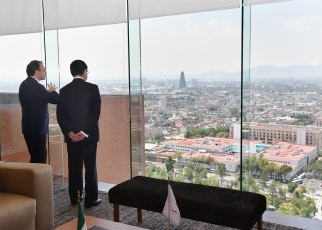 On May 24, commencing at 2:45 p.m. (local time) for approximately one hour and 45 minutes, Mr. Taro Kono, Minister for Foreign Affairs, on his visit to the United Mexican States, held a lunch meeting with H.E. Dr. Luis Videgaray Caso, Secretary of Foreign Affairs of Mexico, at the Mexican Secretariat of Foreign Affairs. The overview is as follows.

1. Minister Kono expressed his pleasure to visit Mexico on the occasion of the 130th anniversary of the establishment of diplomatic relations, and he intends to further strengthen collaboration between the two countries as strategic global partners that share fundamental values, toward resolving the international community’s various problems.

In response, Secretary Videgaray expressed congratulations that the two countries, which enjoy a relationship of trust, are celebrating the 130th anniversary of the establishment of diplomatic relations, and explained that Mexico also intends to keep cooperating closely with Japan, as its primary partner in Asia.

2. With regard to the Trans-Pacific Partnership, Minister Kono highly evaluated that Mexico was the first country to approve the TPP11 agreement among participating countries. Furthermore, the two sides shared the view that the TPP has a strategic importance that will lead to a new order in the Asia-Pacific region, and that they will continue to collaborate toward its early entry into force.

3. The two ministers confirmed that the economic relationship between the two countries is unprecedentedly close, and with regard to the renegotiation of the North American Free Trade Agreement (NAFTA), Secretary Videgaray stated that Mexico will continue to consider the interests of Japanese companies. Minister Kono expressed gratitude in response.

4. With regard to North Korea, Minister Kono explained Japan’s basic position after the announcement by the United States that the U.S.-North Korea Summit Meeting on June 12 was cancelled, and Secretary Videgaray expressed support for Japan’s position. The two ministers shared the view that Japan and Mexico would continue to collaborate closely.

5. In addition, the two sides exchanged views on cooperation in the international arena, including disarmament and nonproliferation, climate change and issues relating to artificial intelligence (AI), as well as on regional affairs, including the situation in Venezuela.