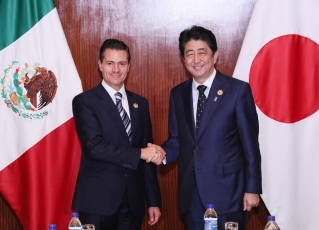 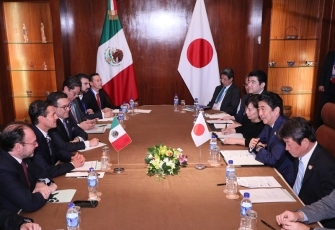 1. At the beginning, Prime Minister Abe expressed his pleasure to able to have the meeting with President Peña Nieto for the forth time, and told that the relationship between the two countries is making great progress in a broad range of fields, such as the rapidly expanding economic relationship that symbolized by more than 1,100 Japanese companies in Mexico, the largest number in Latin America.

Additionally, Prime Minister Abe once again conveyed his deepest condolences over the damage caused by the earthquakes in September in Mexico, shared the view that the activities of Japanese Disaster Relief Rescue Team contributed to strengthening further the bond between the two countries, which encouraged Japan to continue providing effective assistances in the future. In response, President Peña Nieto expressed his pleasure to meet Prime Minister Abe again and reiterated his deep gratitude for the solidarity that Japan displayed by dispatching the Japan Disaster Relief Rescue Team, whose contribution moved strongly the hearts of the Government of Mexico and Mexican people. President Peña Nieto also congratulated Prime Minister Abe on his victory in the recent general election.

2. Prime Minister Abe welcomed the agreement in principle reached at the Trans-Pacific Partnership (TPP) Ministerial Meeting on the previous day, and explained that as standard-bearer of free trade he hoped to continue to cooperate closely with President Peña Nieto to bring the TPP into force expeditiously. In response, President Peña Nieto welcomed the progress with the TPP11, and explained that Mexico had also worked hard to ensure that the all member countries of the TPP11 moved forward.

In addition, after President Peña Nieto referred to the renegotiation of the North American Free Trade Agreement (NAFTA), Prime Minister Abe expressed gratitude for the consideration of the Mexican government in terms of ensuring that Japanese companies which operate in Mexico are not adversely affected by the NAFTA renegotiations.

3. Furthermore, Prime Minister Abe appreciated the resolute response that the Government of Mexico has taken with regard to North Korea, including expelling North Korea’s “Ambassador” to Mexico, and stated that Japan would continue to coordinate with Mexico in order to maximize the pressure on North Korea through all measures. Prime Minister Abe also sought understanding and cooperation with regard to resolving the abductions issue. In response, President Peña Nieto explained that Mexico had been condemning North Korea thus far also, and that, in his view, Mexico’s actions had encouraged other countries in Latin America to take similar actions.

4. The two leaders also exchanged views on cooperation in the international arena. In addition, both leaders confirmed that this year’s 120th anniversary of the Japanese immigration to Mexico and next year’s 130th anniversary of the establishment of diplomatic relations will be opportunities to further enliven their relationship.