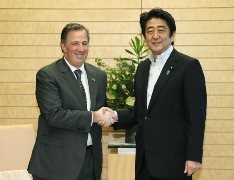 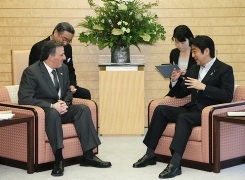 On June 27, Prime Minister Shinzo Abe received a courtesy call from H.E. Dr. José Antonio Meade Kuribreña, Secretary of Foreign Affairs of the United Mexican States, who was on a working visit to Japan upon invitation by the Ministry of Foreign Affairs. The overview of the meeting is as follows.

3. Secretary Meade stated that economic relations are enhancing, in terms of Japanese investment in Mexico, which has reached 12 billion USD, of which half implemented in the past three years, the value of Japan-Mexico trade, which has doubled in recent years to reach 22 billion USD, and the number of Japanese tourists visiting Mexico, which exceeds 100,000 people. Secretary Meade also stated that Abenomics is attracting strong interest in Mexico and Latin America, and that the “three arrows” of Abenomics are on target. Prime Minister Abe expressed his expectation that investment from Mexico will increase because of the expanding domestic demand in the Japanese economy brought on by Abenomics, and further strengthen the bilateral economic relations.