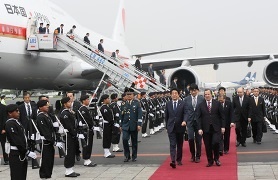 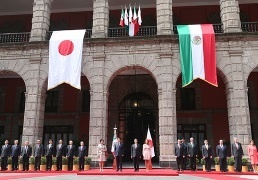 Welcoming ceremony Photo: Cabinet Public Relations Office
Prime Minister Shinzo Abe paid a visit to Mexico and participated in events in Mexico City from July 25 to 27. The overview of the outcomes is as follows. (This is the first time that a Japanese Prime Minister has visited Mexico in a bilateral context in 10 years, since Prime Minister Junichiro Koizumi’s visit in 2004). 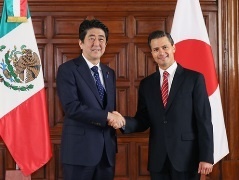 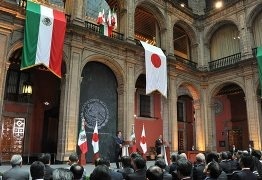 2. Wreath laying ceremony at the Altar of the Fatherland (Heroic Cadets Memorial) 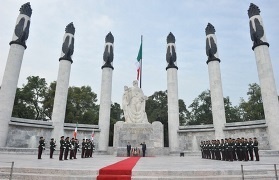 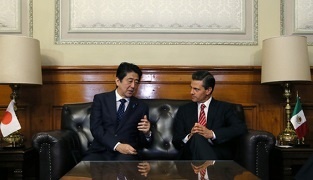 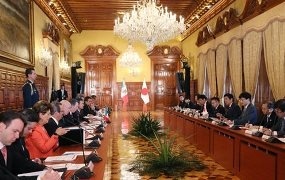 (A) President Peña Nieto welcomed Prime Minister Abe’s visit to Mexico and welcomed the many Japanese business leaders accompanying the Prime Minister on his visit. The President appreciated that the Prime Minister visited Mexico at its request expressed on the occasion of the previous two meetings, and hoped that the meeting would elevate the bilateral relationship to an even higher level. The President said that Mexico is a friend of Japan, and that it would never forget the assistance Japan always extended even when Mexico faced adversity. In addition, the President expressed his hope that the appointment of Mr. Javier Aguirre as the head coach of the Japan national football team will lead to its strong performance.
(B) Noting that they were meeting for the third time since President Peña Nieto’s visit to Japan in April 2013, Prime Minister Abe stated that he was delighted with the steady evolvement of the bilateral relationship. The Prime Minister referred to the appointment of Mr. Aguirre as the new head coach of the Japan national football team one day before his departure for Mexico, and expressed hope that the Japan national team will be successful under the leadership of the Mexican head coach. Prime Minister Abe also noted that he was pleased to visit Mexico on the 400th anniversary of the Hasekura Mission, fulfilling his promise with the President. Prime Minister Abe noted that this was his first visit to Mexico since accompanying his father, Shintaro Abe, then-Minister for Foreign Affairs, in 1985, shortly after the large-scale earthquake in the country.
(C) President Peña Nieto went on to say that strong performance by the Japan national football team under a Mexican head coach would promote overall sports exchanges. The President welcomed the document signed on this day, and looked forward to making Prime Minister Abe’s visit a fruitful and productive one. 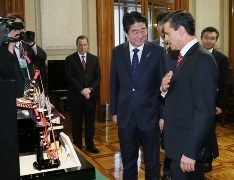 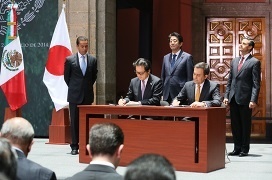 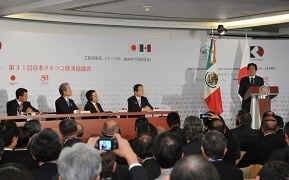 Photo: Cabinet Public Relations Office
On Friday, July 25, Prime Minister Abe attended the 31st Japan-Mexico Businessmen’s Joint Committee Meeting at the JW Marriott Hotel in Mexico City.
This Committee Meeting was hosted jointly by Nippon Keidanren (Japan Business Federation) and the Mexican Business Council for Foreign Trade, Investment and Technology (COMCE), and it was held from 5:00 p.m. to 7:30 p.m. on the same day. A large number of representatives from both countries attended the meeting. Attending on the Japanese side were Prime Minister Abe as well as Deputy Chief Cabinet Secretary Hiroshige Seko, Senior Vice-Minister of the Cabinet Office Yasutoshi Nishimura, Nippon Keidanren Chairman Sadayuki Sakakibara, Nippon Keidanren Japan-Mexico Economic Committee Chairman Toshiyuki Shiga, among others, and attending on the Mexican side were President Peña Nieto as well as Secretary of Economy Ildefonso Guajardo Villarreal, Secretary of Communications and Transport Gerardo Ruiz Esparza, COMCE President Valentín Díez Morodo, COMCE Mexico-Japan Business Committee Chairman Enrique Zambrano, among others, and so a large number of representatives from both countries attended the meeting.
President Peña Nieto welcomed the fact that more than anything else, trust and solidarity are being encouraged thanks to the remarkable growth in the two countries’ trade and investment, and he called for deeper cooperation with Mexico, which possesses a young population and rising level of education.
Prime Minister Abe noted in his greeting that Japanese companies do not simply produce goods but they also build mutually beneficial relations including through human resources training, and that the Government of Japan has also been providing technological cooperation. The Prime Minister also stated that he would like Mexican companies to recognize the Japan’s merit, and stated that cooperation and ties in the bilateral relationship will deepen further.

5. Visit to National Museum of Anthropology 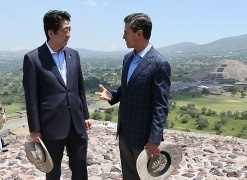 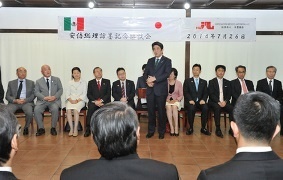 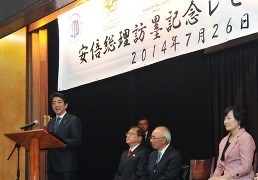 1. This was the first time in 10 years that a Japanese Prime Minister has visited Mexico in a bilateral context. The visit succeeded in demonstrating that Latin America, and Mexico in particular, is of deep interest to the Government of Japan. The Mexican side consistently emphasized that bilateral relations are based on trust, and it was possible to confirm a robust relationship of mutual trust as strategic global partners.
2. This was the third time Prime Minister Abe has held a summit meeting with President Peña Nieto, and partly because the visit was accomplished in response to repeated invitations by the other side, the meetings, visits and other events took place within an homelike atmosphere, and it contributed to enhancing a personal bond between the two leaders.
3. Japanese business leaders and the heads of Japanese universities and government institutions accompanied Prime Minster Abe. 14 documents were signed and exchanged in connection with a wide range of fields, including the economy, science, education, and science and technology. The visit provided opportunities for the breadth of the cooperative relationship between the two countries to widen dramatically in the future. In particular, it was possible to demonstrate Japan’s strong interest in the outcomes of the various reforms Mexico is pursuing, and particularly the expanded business opportunities accompanying energy reform, and to prepare the groundwork for concrete cooperation in the future. Moreover, it was possible to confirm wide-ranging cooperation in the international arena.