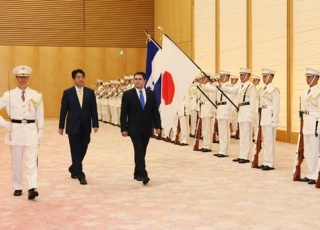 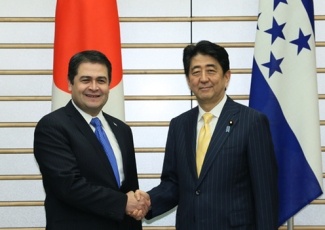 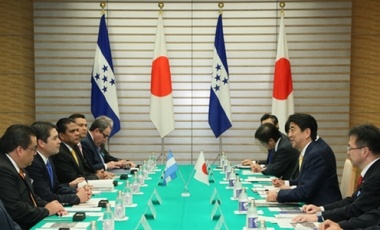 On July 22, Mr. Shinzo Abe, Prime Minister of Japan, held a summit meeting with H.E Mr. Juan Orlando Hernández Alvarado, The President of the Republic of Honduras. The overview of the meeting is as follows.

) was issued. Afterwards a dinner hosted by Prime Minister and Mrs. Abe for the President and his wife took place in a cordial atmosphere, with conversations covering a broad range of themes on bilateral relations such as sports exchanges. 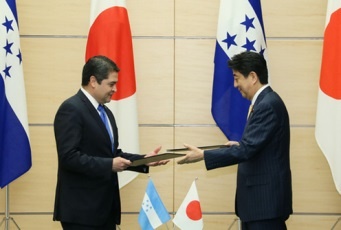 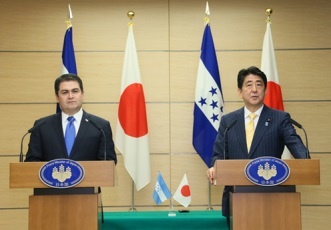 Prime Minister Abe welcomed President Hernández on his first visit to Japan and the first visit by a President of Honduras in 10 years, expressing his pleasure at being able to welcome the President in Japan in this commemorative year of the 80th anniversary of the establishment of diplomatic relations between Japan and Honduras and the Japan-SICA Friendship Year 2015. Prime Minister Abe noted that Japan would continue to support the stability and development of Honduras and that the Government seeks to strengthen relations in various fields as a partner with which Honduras can “develop, lead and inspire together.”

In response, President Hernández stated that he was delighted to be able to visit Japan in this memorable year, given that Japan is a country with which Honduras shares close and brotherly relations. The President noted that Honduras would join together with Japan in making relations even closer.

Prime Minister Abe provided an explanation about the Government’s policy of “Proactive Contribution to Peace” based on the principle of international cooperation, noting that Honduras was the first country to which a Self-Defense Force (SDF) Japan Disaster Relief (JDR) Team had been dispatched, following hurricane damage in 1998. President Hernández welcomed and expressed his support for the activities being implemented by Japan. President Hernández also expressed his appreciation for the assistance that had been provided by Japan in the wake of the hurricane, noting that it was something that had not been forgotten by the people of Honduras. President Hernández also explained plans to improve law and order and develop human resources with a view to achieving prosperity in Honduras, and also infrastructure development plans, which aim to establish Honduras as a logistics center linking the Pacific and Atlantic Oceans.

Both leaders also noted and welcomed the fact that this year marks the 40th anniversary of the conclusion of an agreement on the dispatch of Japan Overseas Cooperation Volunteers (JOCV).

3. Strengthening Cooperation in the International Arena

Prime Minister Abe expressed his wish to further strengthen cooperation with Honduras on various international matters, including United Nations Security Council (UNSC) reform. In particular, President Hernández responded that with regard to UNSC reform, Honduras supports the position of the G4, including Japan.

Page Top
Back to Japan-Honduras Relations