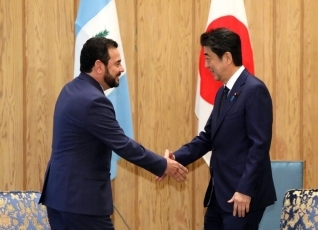 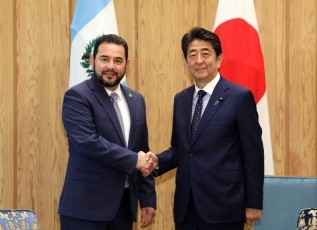 On October 24, commencing at around 12:05 p.m. for approximately 15 minutes, Mr. Shinzo Abe, Prime Minister of Japan, held a Summit Meeting with H.E. Mr. Jimmy Ernesto Morales Cabrera, President of the Republic of Guatemala, who is visiting Japan. The overview of the meeting is as follows. The meeting was also attended by Mr. OKADA Naoki, Deputy Chief Cabinet Secretary, Mr. HASEGAWA Eiichi, Special Advisor to the Prime Minister, Mr. HAYASHI Hajime, Assistant Chief Cabinet Secretary, and others from the Japanese side, and by H.E. Mr. Cristóbal Herrera, Ambassador Extraordinary and Plenipotentiary of Guatemala to Japan, and others from the Guatemalan side.

Prime Minister Abe welcomed President Morales to Japan, stating, “Our two countries share universal values, such as democracy, human rights, market economy, and rule of law,” adding, “It makes me happy that next year, we will celebrate the 85th anniversary of Japan-Guatemala diplomatic relations.”

In response, President Morales expressed his sympathy to those affected by Typhoon Hagibis, and expressed appreciation for Japan’s assistance following the eruption of Fuego volcano in Guatemala last year. In addition, President Morales stated, “I would like to thank Tawaramoto Town for serving as a host town. I wish for the success of the Tokyo Olympic and Paralympic Games.”

President Morales also expressed gratitude for the cooperation of the Japan Aerospace Exploration Agency (JAXA) with the project for launching Guatemala’s first satellite. Prime Minister Abe offered his wishes for the success of the project.

The two leaders also exchanged views regarding the situation in East Asia.