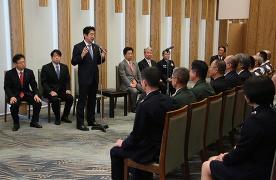 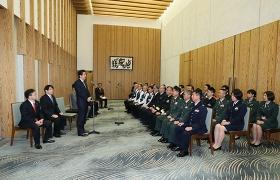 On December 26, for approximately 10 minutes from 9:40 a.m., Prime Minister Shinzo Abe received a courtesy call by 30 representatives of medical teams, expert teams and Japan Self-Defense Forces (JSDF) units which had been dispatched as Japan Disaster Relief Teams in response to typhoon damage in the Philippines. The outline of the meeting is as follows;

1. The representatives of the Japan Disaster Relief Teams reported to Prime Minister Abe, on the activities they carried out in the disaster-affected areas, including medical activities (by medical team and JSDF), rapid recovery advice and guidance on removing and controlling oil discharged from a ship (by expert team), and transportation of relief goods and affected people and epidemic prevention activities (by JSDF).

2. In response, Prime Minister Abe said the relief activities undertaken by the Japan Disaster Relief Teams are an expression of the Japanese heart, and are being highly praised by the citizens of the Philippines and people around the world. Prime Minister Abe explained that the teams’ activities received a large number of “Likes” and expressions of gratitude on the Prime Minister’s Office’s English language Facebook page, and he expressed his appreciation for the efforts of the team members who supported those activities.