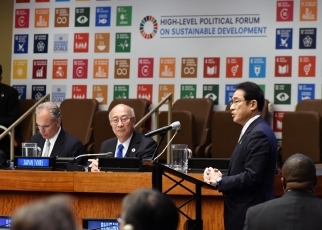 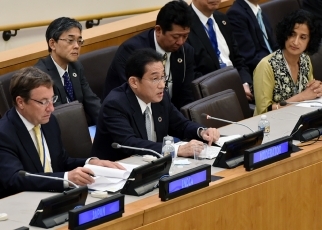 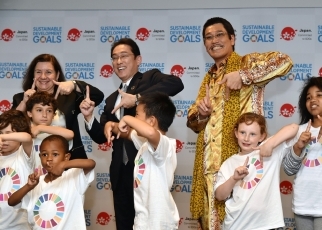 (1) In the afternoon of July 17, Foreign Minister Kishida attended the HLFP “Voluntary National Reviews” session held in the United Nations Headquarters and gave a presentation in English in which he promoted Japan’s initiatives toward the creation of a diverse and inclusive society in which “no one is left behind” (The Minister’s Speech (English (PDF)

)).
Specifically, he pointed out “Japan’s efforts to achieve SDGs will revitalize both Japan and the world”, and then stated that Japan aims to create “a diverse and inclusive society where everyone can demonstrate their abilities to the fullest” and “a society where even a single mother and her daughter living under difficult conditions, or a boy born with disabilities can succeed” and that “Japan will make every effort both domestically and internationally to achieve SDGs and realize the society that I envision.” Moreover, he explained that Japan has created a foundation to implement SDGs. Specifically it has established the “SDGs Promotion Headquarters” and held multi-stakeholder meetings such as the “SDGs Promotion Roundtable” to formulate the “SDGs Implementation Guiding Principles” and it is aiming to realize the vision it has proclaimed based on this foundation. Moreover, he expressed the determination that “combining the wisdom of various stakeholders including civil society, private enterprises and the government, Japan will take concrete actions, both at home and abroad” based on the concept of the Public Private Action for Partnership (PPAP).

(2) Continuing on from this, he used a video

to present some cases exemplifying the PPAP. Specifically, he presented (A) international technical cooperation using the sewerage technology of Kitakyushu City as the first-ever support for developing countries by a Japanese region using its technology, (B) support for the introduction of BOSHITECHO, or the Maternal and Child Health Handbook to developing countries by JICA as an example of expanding initiatives for maternal and child health to developing countries, and (C) “KOKO Plus” by Ajinomoto and initiatives by Japan Food Ecology Center as examples of efforts for solving social issues by companies using products and circulation systems related to food and food problems.

(3) In addition, from the perspective that the SDGs are initiatives to create better future in the year 2030 and beyond and the empowerment of children and young is the key to achieving the SDGs, Ms. Lin Kobayashi (Co-Founder and Chair of the Board at the International School of Asia, Karuizawa), who founded and is currently running an innovative high school in Japan, gave a speech based on her experience as a school administrator regarding the importance of training the next generation, and in particular fostering “change agents” for peace and sustainability.

(4) Building on the above, Foreign Minister Kishida emphasized Japan’s position of focusing on policies targeting the next generation, pointed out that Japan will squarely address various issues at home, such as inequality and the role of women, and mentioned that Japan will implement strong and holistic policies to tackle challenges like poverty among children, youth unemployment, and violence against children, based on the SDGs Implementation Guiding Principles. He declared regarding international cooperation that Japan will also promote international cooperation pertaining to the SDGs based on the notion of human security, and announced that that the Government of Japan commits to provide 1 billion dollars of assistance by 2018, focusing on children and youth, particularly in the areas of education, health, disaster risk reduction, and gender equality.

(5) Foreign Minister Kishida said he believed mainstreaming of SDGs is essential toward the full implementation of SDGs, presented initiatives including the establishing the “Japan SDGs Award” and distributing Japan SDGs logo to organizations committed to SDGs. He also explained that Japan has bolstered efforts in cities and towns all over Japan, and is collaborating with the entertainment industry. He expressed his intention to enhance these efforts to mainstream SDGs by creating a nation-wide movement through those initiatives.

(6) At the question-and-answer session held after the above presentation, questions were received from representatives of Thailand, Canada, and the UN Major Group for Children and Youth) regarding Japan’s specific initiatives for achievement of the sustainable development goals (SDGs), how Japan is supporting achievement of the SDGs in developing countries, etc. In response, Foreign Minister Kishida replied that in order to realize “Japan's Plan for Dynamic Engagement of All Citizens,” a full-participation society in which anyone can engage, Japan is advancing initiatives for measures in the areas of supporting youth and promoting gender equality in particular. Regarding support for developing countries in the future, he said Japan will provide cooperation for stipulating national strategies that incorporate elements of the SDGs, and will support policies in the areas of supporting youth support and promoting gender equality.

(Reference) United Nations High Level Political Forum (HLPF)
(1) This is the forum that is considered most important for international follow-up on the 2030 Agenda. It is convened under the auspices of the United Nations Economic and Social Council (ministerial level, every year) and the United Nations General Assembly (summit level, every four years; the next summit meeting will be in 2019). This year the ministerial meeting was held from July 17 to July 19 in New York.
(2) At the High Level Political Forum, Voluntary National Reviews in which countries announce their own initiatives regarding the 2030 Agenda are events that receive a lot of attention, and this year 43 countries including Japan participated in the reviews (last year 22 countries participated).

(2) In the session, Foreign Minister Kishida stated that we must build robust partnership to tackle our common issues in collaboration with all stakeholders across countries, and appealed to the importance of partnership across countries and the sharing of experiences in Asia (The Minister’s Speech (English (PDF)

(3) In response to these remarks from the minister, Sompo Japan Nipponkoa Insurance Inc. and Japan Food Ecology Center, Inc. presented their respective initiatives as outstanding examples from the private sector, Thailand presented initiatives related to the building of a sustainable economic model, etc., Malaysia presented examples of collaboration with civil society and others and India gave a presentation about the roles of local governments. Then, active discussion was conducted.

(1) Foreign Minister Kishida attended and gave a speech at a reception hosted by the Government of Japan in the Delegates Dining Room at the United Nations Headquarters from July 17 (Monday) at 7 p.m. (local time; July 18 (Tuesday) at 8 a.m. Japan time) for approximately 20 minutes, during his visit to New York, the United States in order to attend the United Nations High Level Political Forum (HLPF).

(2) In the speech Foreign Minister Kishida promised that Japan would continue working hard toward a world in which “no one is left behind” because it was determined to achieve the SDGs, and stated that when undertaking those initiatives it is important to build a robust partnership for all stakeholders to join together across countries to tackle our common issues and that mainstreaming of the SDGs is important.

(3) Furthermore, Chef de Cabinet to the Secretary-General of the United Nations Viotti delivered a message on behalf of Secretary-General Guterres, in which he expressed gratitude to Japan for its initiatives toward achievement of the SDGs and expectation for Japan’s further active role. Moreover, PIKOTARO, who had just released a video to raise public awareness towards the SDGs, gave a performance (of the original PPAP song and the SDGs version of PPAP

together with children at the United Nations International School) to communicate that the Government of Japan gives top priority to “Public Private Action for Partnership (PPAP)” in promotion of the SDGs.

(4) Moreover, at this reception where Hiroshima-made sake and Japanese food were offered, private enterprises and civil society organizations actively working on the implementation of the SDGs put up booths to present their advanced initiatives. In addition, there was a photo exhibition by the United Nations Information Centre (UNIC), brilliantly showcasing this reception appealing to the initiatives of Japan to promote the SDGs.

(Reference)
This reception was held from 7 p.m. to 9 p.m. and was attended by approximately 300 people, including members of the delegations from each country participating in the HLPF , officials from UN and other international organizations, etc.