Attendance to the First High-Level Meeting of the Global Partnership for Effective Development Co-operation by Mr. Seiji Kihara, Parliamentary Vice-Minister for Foreign Affairs (Overview and Evaluation) 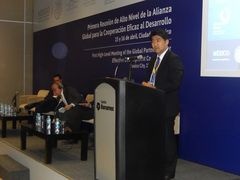 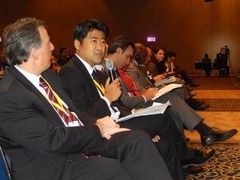 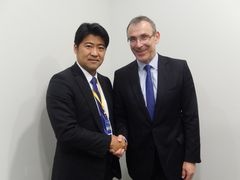 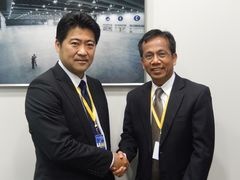 1. Parliamentary Vice-Minister for Foreign Affairs Mr. Seiji Kihara attended the first high-level meeting of the “Global Partnership for Effective Development Co-operation (GPEDC)” held in Mexico City, Mexico on April 15th and 16th.
2. During the meeting, participants had meaningful discussions on important development challenges such as effective tax systems and domestic resource mobilization, south-south cooperation/ triangular cooperation/ knowledge sharing, development cooperation with middle income countries, and the role of the private sector, in addition to follow-up of commitments made at the Busan High Level Forum on Aid Effectiveness.
3. Parliamentary Vice-Minister Kihara emphasized, in his remark at a plenary session, that Japan had 40 year history of triangular cooperation and was a pioneer in this field. He introduced examples and achievements of Japan’s triangular cooperation and highlighted the importance of an inclusive partnership which gathers not only assistance for developing countries by developed countries but also assistance by all actors including emerging donors and the private sector.
4. During the discussion on development cooperation with middle income countries, Parliamentary Vice-Minister Kihara shared Japan’s own experience of becoming a developed country without falling into the “middle income trap” and examples where Japan’s assistance for Southeast Asia contributed to growth of the region. He also advocated the importance of education and human resource development in assisting middle income countries, and also of institution building and improvement of business environment through infrastructure development.
5. During the meeting, the view that inclusive efforts by various development actors are necessary for resolution of development challenges in developing countries including middle income countries was shared among participants. Specifically, the importance of not only ODA but also effective utilization of domestic resources in developing countries through improvement of tax systems, contribution to development through south-south cooperation and triangular cooperation, effective use of private finance, and the catalytic role of ODA to attract private finance was confirmed as resources of funding contributing to development. In addition, as efforts through an inclusive partnership are necessary to achieve post 2015 development agenda now being discussed at UN, the expectation that GPEDC will be able to play such a role as an inclusive partnership was expressed.
Taking the above-mentioned meaning of GPEDC into account, further efforts of international society are required toward making GPEDC a true and inclusive partnership which furthermore contributes to resolution of international development challenges.
6. On the fringe of the meeting, Parliamentary Vice-Minister Kihara held bilateral meetings with European Commissioner for Development Andris Piebalgs of EU, Executive Director of Mexican Agency of International Cooperation for Development Juan Manuel Valle Perena of Mexico, Director-General of the National Economic and Development Authority Arsenio Balisacan of the Philippines, Deputy Minister of National Planning and Economic Development Lei Lei Thein of Myanmar, Deputy Minister of Planning and Investment Nguyen Chi Dung of Viet Nam, and Parliamentary State Secretary Thomas Silberhorn of Germany, to have meaningful discussions on future cooperation and the way GPEDC should be going forward.
Page Top
Back to Latin America and the Caribbean