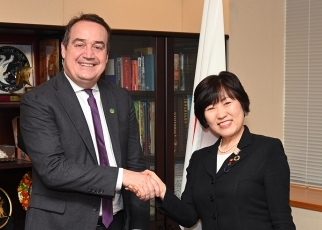 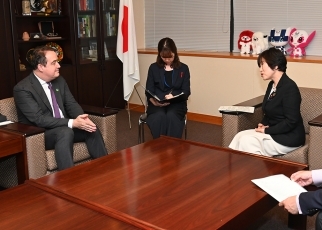 On May 21, Dr. Toshiko Abe, State Minister for Foreign Affairs received a courtesy call by Mr. Yannick Glemarec, Executive Director of the Green Climate Fund (GCF) and had discussions for approximately 30 minutes, during his visit to Japan.

Dr. Abe congratulated Mr. Glemarec on his assumption of office as Executive Director of the GCF. Noting that the GCF would play an increasingly important role as the full implementation of the Paris Agreement would start from next year, she stated that the GCF needed more effective and efficient resource management and operation and expressed her expectation for Mr. Glemarec’s performance. She also requested Mr. Glemarec to strengthen partnership with Japanese companies in its activities.

Dr. Abe and Mr. Glemarec also exchanged views on recruitment of Japanese staff to the GCF and its public relations activities in Japan.