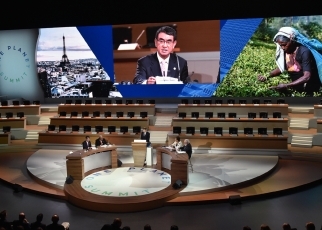 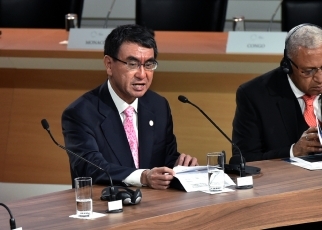 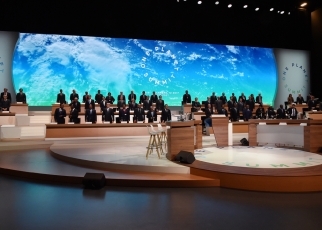 Mr. Taro Kono, Minister for Foreign Affairs, attended the One Planet Summit held in Paris, France on December 12. France convened this Summit jointly with the United Nations (UN) and the World Bank. The three purposes of the Summit were (1) to commemorate the second anniversary of the adoption of the Paris Agreement and maintain momentum for expanding support for the Agreement, (2) to confirm the importance of climate finance and pursue the “greening” of public finance and private finance; and (3) to share good practices and lessons so that countries and various actors will pursue low-carbon, resilient economies.

The overview and evaluation of the Summit are as follows.

2. Overview of the discussions

The panel discussion was held across three sessions on the themes of new frameworks for public finance under the Paris Agreement, increasing and creating opportunities for public engagement for climate change, and accelerating investment by leveraging public finance to encourage private investment. It was pointed out that although public finance will continue to perform an important role in the future, in order to support the development of sustainable societies that are resilient to climate change, public funding alone will not be enough, and so it will be important to mobilize private funding in order to support the elaboration of long-term climate policies. In particular, an active discussion took place on the role of public finance and the importance of private finance in the Paris Agreement.

Minister Kono, who participated as a panelist, expressed Japan’s determination to lead the world in increasing the scale of climate finance through its advanced technology and innovation, and expressed the view that for that purpose also, public-private partnerships should be strengthened. More specifically, Minister Kono expressed support with registering Japanese companies for the Science Based Targets (SBTs), which are referred to as the corporate version of the 2 degree target, and announced that Japan aims for 100 companies to be approved by March 2020.

Secondly, Minister Kono expressed the intention to creatively utilize innovation and science and technology to contribute to the world’s measures for combating climate change. Specifically, Minister Kono mentioned strengthening the relationship between science and technology and innovation for measures to combat climate change. Minister Kono stated that Japan will expand its participation in the Climate Risk & Early Warning Systems (CREWS) initiative being led by France by joining its project on disaster management in the Pacific, will launch two observation satellites, GCOM-C and GOSAT-2, and will lead the world through hydrogen energy technologies and other initiatives. In addition, Minister Kono explained that the 2020 Tokyo Olympics will be a showcase of the Hydrogen Society, and he also introduced Japan’s initiatives such as the introduction of fuel cell vehicles and further expansion of hydrogen stations. Many of those present welcomed and appreciated these initiatives.

The panel discussion was held on the three themes of unlocking the transformative role of climate finance, ways of perceiving climate-related risks and opportunities, and innovative action and commitment by investors for realizing low-carbon societies.

The panel discussion was held on the three themes of the importance of international networks such as intercity collaborations, innovative partnerships for supporting action on regional climate change, and the necessity for companies and local governments to cooperate. Participants exchanged views on solutions to encourage a greater collaboration between public and private sectors and between the different levels of governments (international, national, regional and local) in order to implement the Paris Agreement and achieve countries’ National Determined Commitments (NDCs).

The panel discussion was held on the three themes of accelerating investment in order to build effective climate-change resilience, the need for action in order to realize carbon neutrality, and the importance of public policies for sustainable and inclusive growth.

Within a discussion that centered on French President Macron, UN Secretary General Guterres, and World Bank President Kim, state leaders made comments, and a discussion took place on three topics: (1) increasing finance for adaptation and resilience, (2) accelerating the transformation towards a low-carbon economy, and (3) climate change issues at the heart of the financial system, and decision-making by multi-stakeholders. Various commitments and initiatives relating to these topics were announced.

3. Significance and evaluation of the Summit

At the juncture of the second anniversary of the adoption of the Paris Agreement the international community united in expressing a commitment to steadily implementing that Agreement, which can be appreciated as being very meaningful.

This One Planet Summit focused on ways of trying to mobilize climate finance, which is essential for measures to combat climate change, but Japan was also able to present its proactive stance of seeking to increase the scale of climate finance not only by utilizing the financial markets but also by collaborating with companies and utilizing technological strengths through innovation.

However, further efforts by each country will be essential to achieving the goals of the Paris Agreement, and Japan will also engage more proactively with the climate change issue, including formulating long-term strategies.