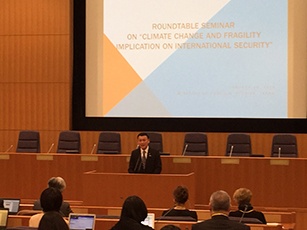 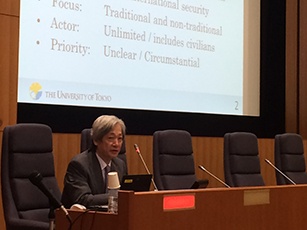 Prof. Fujiwara from The University of Tokyo
giving a keynote speech 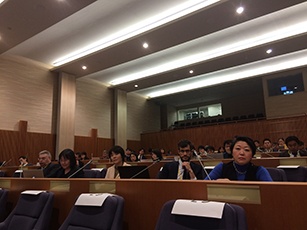 Around 100 people attended including experts
and general audiences

and Prof. Kiichi Fujiwara from Graduate Schools for Law and Politics, Policy Alternative Research Institute, The University of Tokyo gave a keynote speech. Through the discussion in each session, all the participants shared their views and information about the possible impact brought by climate change in each field, deepened their understanding on the complicated and compound risks to climate change and fragility, and discussed how international community would tackle those issues.

1. Overview of the Seminar

Prof. Fujiwara gave a keynote speech on climate change and fragility implications for international policy and security, and Mr. Alexander Carius, Co-founder and Director of Adelphi (a leading independent think tank and public policy consultancy on climate, environment and development) introduced the current research and situation of international cooperation on climate change and fragility.

In session 1, Ms. Shiloh Fetzek, Senior Fellow for International Affairs of the Center for Climate and Security (a non-partisan security and foreign policy institute with expertise on military, security and foreign policy) gave a presentation on climate change and fragility implications for national security from a perspective of security policy in the United State of America. Dr. Malin Mobjork, Senior researcher of Climate Change and Security at Stockholm International Peace Research Institute (an independent international institute dedicated to research into conflict, armaments, arms control and disarmament) made a presentation on the UN Security Council and the integration of climate security risks. After these presentations, all the participants actively discussed the necessity of identifying and addressing the security risks brought by climate change.

In the afternoon session, a closed session among the experts was held, and they had deeper discussion over various fields on climate change and fragility implications on international security. After the closed session, panel discussion involving all the participants including general audiences was held with the participation of the panelists; Ms. Kaoru Nemoto, Director of United Nations Information Centre, Mr. Patrick Safran, Principal Operations Coordination Specialist of Pacific Department at Asian Development Bank, and Dr. Yasuko Kameyama, Deputy Director of Center for Social and Environmental Systems Research National Institute for Environmental Studies. All the participants reaffirmed that climate change is among the most serious challenges that international community faces and poses a threat to the environment, global security and economic prosperity, and the actions should be taken in various fields in the international society. Mr. Tomoaki Ishigaki, Chair of the G7 Working Group delivered closing remarks, expressing appreciation for the active discussion and valuable inputs made through the seminar that could be reflected in the future work of the G7 Working Group. Mr. Ishigaki reaffirmed that G7 Working group will continue its work on climate change issues to enhance the resilience and reduce the fragility among countries, which is the mutual goal of G7.

2. Overall assessment of the Seminar

There were 100 participants including 50 experts from various fields on climate change and fragility implications on international security. It was the first time that the government of Japan held a seminar primarily focused on climate change and fragility, and generated the momentum on discussing the issue nationally. Positive feedback was given from many of the participants that they could deepen the understanding of the issue, which is one of the serious challenges that international community faces and affects various fields. Many of them also agreed that strong cooperation among experts on various areas is crucial. By hosting the event, Japan could show the world that, as the chair of G7, it is working on the issue while taking the international leadership. The outcome of the seminar will be considered in the future meetings of G7 Working Group.

3. Report of the Seminar

The report of the Roundtable Seminar on "Climate Change and Fragility Implications on International Security" including the background of G7 “Climate Change and Fragility” Working Group, the overview of open sessions and closed sessions (possible climate impact on migration, infectious disease and maritime issues and climate change impacts on agriculture, disaster management and the role of the private sector) is here (PDF)

The Follow-up Review Meeting was held three times, on February 16 and 22,and March 1, to discuss how the implications of climate change for a wide range of sectors--including energy and natural resources, finance, DRR, the movement of persons (infectious disease, migration, etc.), and security--should be reflected in policies. The meeting was attended by experts from various sectors, including researchers as well as officials at think tanks and NGOs (see Attachment 3 for a list of participants). Summary (PDF)

Since 2013, under the Presidency of United Kingdom, the Expert Meetings on climate change implications for security risks and economy have been held. In 2015, the G7 countries commissioned Adelphi to head a consortium and write a report called “A New Climate for Peace

In G7 Foreign Minister’s Meeting in Hiroshima in April 2016, it was decided to continue the activity of the Working Group for at least two more years.