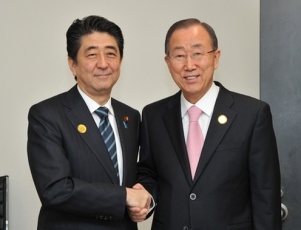 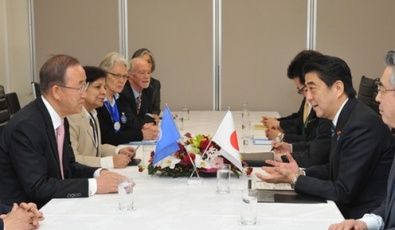 On Saturday, March 14, commencing at 10:00 a.m. for approximately 25 minutes, Prime Minister Shinzo Abe held a meeting with Secretary-General of the United Nations H.E. Mr. Ban Ki-moon. The overview of the meeting is as follows.

1. Prime Minister Abe told Secretary-General Ban that he is pleased to be able to meet him again in Sendai, which has been recovering from the Great East Japan Earthquake, and would like to work closely together to ensure the success of this important UN World Conference on Disaster Risk Reduction. Prime Minister Abe also said that this year marks the 70th anniversary of the foundation of the UN and important meetings are also scheduled in the disarmament, development and climate change fields, and he intends to cooperate closely with Secretary-General Ban. Prime Minister Abe said that together with Secretary-General Ban, he wants to celebrate the journey that Japan and the UN have taken together at the Symposium of the 70th Anniversary of the UN, which is scheduled to be held on March 16.

2. In response, Secretary-General Ban expressed his gratitude for Japan’s initiative in the disaster risk reduction field, and said he wants to further strengthen cooperation with Japan in this important year, the 70th anniversary of the UN.

3. In addition, with regards to Security Council reform, Prime Minister Abe said that in the milestone year of the 70th anniversary of the UN, it will be extremely important to achieve concrete results with Security Council reform. Prime Minister Abe also expressed Japan’s determination to perform a proactive role in formulating the Post-2015 Development Agenda, and both sides shared the view that they will continue to cooperate going forward.

4. Furthermore, regarding the climate change, Prime Minister Abe explained that Japan will contribute to the adoption of a framework that is fair, effective and applicable to all Parties at COP21. Secretary-General Ban expressed his gratitude for the support extended by Japan thus far.

5. During the meeting, the two sides also exchanged views on issues such as counter-terrorism, Syria and Iraq, and shared the view that they will continue to cooperate going forward.