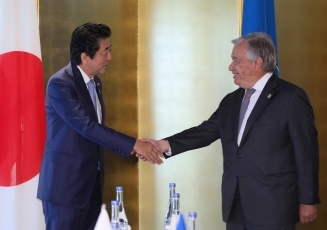 On August 28th, commencing around 11:25 a.m. for approximately 10 minutes, Mr. Shinzo Abe, Prime Minister of Japan had a meeting with H.E. Mr. António Guterres, Secretary-General of the United Nations who is visiting Japan to participate in TICAD7. The overview of the meeting was as follows:

(note)“Sustaining peace”：A concept defined in the UNSC Resolution 2282 adopted in April, 2016. It includesactivities not only for preventing the outbreak, escalation, continuation and recurrence of conflict, but also for addressing root causes, assisting parties to conflict to end hostilities, ensuring national reconciliation and moving towards recovery, reconstruction and development.