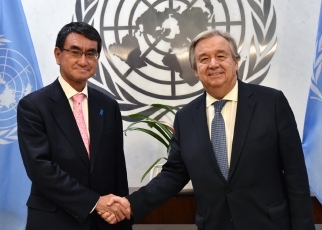 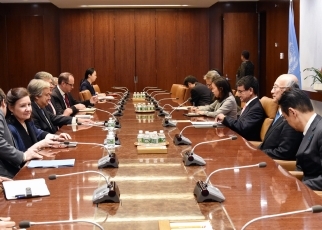 On December 15, commencing at 4 p.m. (local time; 6 a.m. on December 16, Japan time) for approximately 35 minutes, Mr. Taro Kono, Minister for Foreign Affairs, held a meeting with H.E. Mr. Ant?nio Guterres, Secretary-General of the United Nations (UN). The overview of the meeting is as follows.

1 The two sides affirmed that the UN Security Council (UNSC) Ministerial-Level Meeting on the North Korean issue, which was held earlier on the same day, sent a strong message, which is useful for increasing pressure against North Korea, and that the international community will never accept nuclear-armed North Korea and that it is important to ensure the full implementation of all relevant UNSC resolutions by every UN Member State.
The two sides fully shared the view that the denuclearization of the Korean Peninsula is essential for peace and stability in the region.

2 In addition, the two sides also exchanged views on UN reform. Minister Kono explained his view that UNSC reform needs to be an integral part of Secretary-General Guterres's efforts on UN reform and that text-based negotiations should be initiated during the Intergovernmental Negotiations (IGN) of this UN General Assembly session.