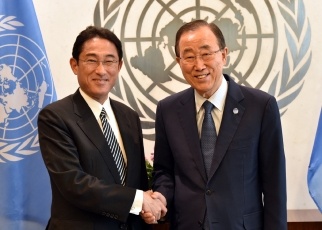 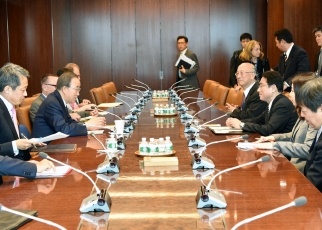 1 On Thursday, July 28, commencing at 3:30 p.m. (New York time) for approximately 30 minutes, Mr. Fumio Kishida, Minister for Foreign Affairs, held a meeting with Mr. Ban Ki-moon, Secretary-General of the United Nations. The overview of the meeting is as follows.

2 At the outset, Minister Kishida expressed his gratitude for Secretary-General Ban's participation in the open debate that took place on the same day. Minister Kishida then explained that, as the recent situation in the Republic of South Sudan demonstrates, peace in Africa is an extremely important issue for the international community, and that Japan intends to continue contributing to peacebuilding in Africa.

3 In addition, with regard to terrorism, Minister Kishida noted that  expectation towards the UN in the fight against terrorism is high. With regard to countering violent extremism, Minister Kishida explained that Japan strongly supports the Plan of Action announced by Secretary-General Ban , and hoped that under Secretary-General Ban , the UN will play a central role so that all international organizations cooperate to promptly implement the Plan.

4 Furthermore, Minister Kishida explained that he hoped to bring greater pressure to bear on North Korea, which continues its nuclear and missile development, through  strict implementation of UN Security Council (UNSC) resolutions and  resolute response in the UNSC. Minister Kishida stated that Japan intends to make efforts to comprehensively resolve important issues of concern such as the abductions and the nuclear and missile issues, while coordinating with the UN.

5 In response, Secretary-General Ban expressed his gratitude for Japan's contributions in fields such as peacebuilding and counterterrorism. He further mentioned the importance of the Tokyo International Conference on African Development (TICAD), as well as climate change.

6 Minister Kishida and Secretary-General Ban shared the view on the need for the UNSC to send a firm message on North Korea.