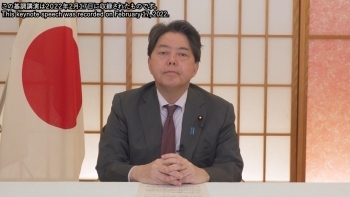 This keynote speech was recorded on February 17.

On the afternoon of March 2, Prime Minister Kishida and Foreign Minister Hayashi respectively delivered video messages (pre-recorded in mid-February) at the "3rd Tokyo Global Dialogue" hosted by the Japan Institute of International Affairs. This online event was held under the theme of Contested Values, Technologies, and Oceans: Intensifying US-China Competition and International Response." The summary of their messages is as follows:

)
(note) Both were pre-recorded in mid-February.
Attachment 3: The position of the Government of Japan on the situation in Ukraine, Japan-Russia relations, and the temporary detention of a Japanese diplomat in China. (Japanese（PDF）

Page Top
Back to Others