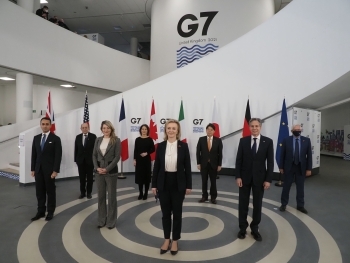 Attendees at the G7 Foreign and Development Ministers' Meeting 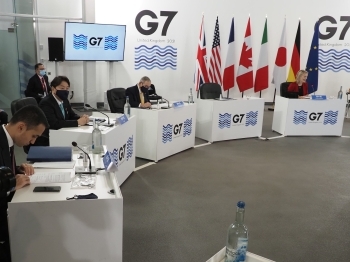 Session on the regional affairs

The G7 Foreign and Development Ministers’ Meeting was held in Liverpool from December 11 to 12. An overview of the meeting is as follows. The meeting was attended by Mr. HAYASHI Yoshimasa, Minister for Foreign Affairs, the Foreign Ministers of the G7 members, and the High Representative of the European Union (EU) for Foreign Affairs and Security Policy. Development Ministers of some G7 members also attended development-related sessions. Foreign Ministers of Australia, South Korea, and ASEAN countries also participated in the sessions that were open to outreach countries. After the meeting, the following documents were issued.

(2) Chair's Statement on the Meeting （PDF）

(3) Chair’s Statement on Cooperation with ASEAN（PDF）

Minister Hayashi highlighted Japan’s serious concerns and opposition to the continuing and strengthening unilateral attempts to change the status quo in the East and South China Seas, serious concerns on the situation surrounding Hong Kong and the human rights situation in Xinjiang, the importance of peace and stability across the Taiwan Strait, the need to address economic coercion, among others. He stated that Japan’s goal is to build constructive and stable relations where Japan will be firm and resolute on what it must advocate and strongly urge China to act responsibly, while working together on common challenges through continuous dialogue. Other G7 members shared their views, including their concerns, on various issues.

The ministers concurred on the need to strengthen the response to the worsening humanitarian crisis in Afghanistan, including through non-state channels such as the UN and NGOs to support basic services. They also stressed the importance of inclusive and representative politics and respect for human rights, particularly for women, girls, and minorities; countering terrorism; and enabling safe passage for those wishing to leave Afghanistan. They shared the view to keep these priorities at the center of any engagement with the Taliban.

The G7 welcomed the resumption of negotiations in Vienna for restoring the Joint Comprehensive Plan of Action (JCPOA) and concurred that Iran should stop its nuclear escalation and quickly reach an agreement.
Minister Hayashi stated that the developments surrounding JPCOA will have a significant impact on the stability of the Middle East region and international efforts for nuclear non-proliferation, and that Japan is closely monitoring the situation. He mentioned the Japan-Iran summit telephone talk of December 12 and stated that Japan intends to continue to encourage Iran to make serious efforts to return to compliance with JPCOA.

Minister Hayashi pointed out that North Korea has continued ballistic missile tests and has increased its nuclear and missile activities. He stressed the importance of committing to the goal of complete, verifiable, and irreversible dismantling (CVID) of all North Korean weapons of mass destruction and ballistic missiles of all ranges, and that full implementation of UNSCRs is essential. He expressed his gratitude to the G7 members for the dispatch of assets to the East China Sea to ensure the effective implementation of relevant UNSRs and called for further coordination. The G7 Foreign Ministers also expressed their concerns on North Korea's nuclear and missile development, and they shared the view to call on North Korea to refrain from provocative actions and to engage in the diplomatic process with the clear goal of CVID.
Minister Hayashi also called for the full understanding and cooperation of the G7 members on the abduction issue, and the G7 Foreign Minister expressed their support.

The G7 reaffirmed the common principles on sustainable and resilient quality infrastructure investment and development finance in the December 3 Leaders' Statement.
Minister Hayashi pointed out the need to enhance transparency and fairness in financing for development and stated that the G20 should emphasize the importance of relevant existing international rules. He also stated that the G20's agreement on the Deferment of Debt Service Initiative (DSSI) and its successor (the Common Framework) was a major step forward against the spread of COVID-19 and that the G20 would like to expand cooperation to ensure its implementation.

Under the theme of "Open Society", the G7 Foreign Ministers discussed media freedom, arbitrary detention, and cyber governance.
They concurred on the importance of defending media freedom, including protecting journalists. They reiterated the G7’s resolve to deter and end arbitrary detention for gaining diplomatic leverage. They reaffirmed their commitment to cooperate in tackling the growing threat of malicious cyber activities, while emphasizing the importance of the UN Framework for Responsible State Behavior in Cyberspace.

ASEAN countries welcomed the first-ever meeting between the Foreign Ministers of the G7 and ASEAN. They expressed their hope for further cooperation between the G7 and ASEAN in several areas, including recovery from COVID-19.
Minister Hayashi emphasized that ASEAN is a cornerstone for realizing a “free and open Indo-Pacific,” the importance of which has been concurred upon by the G7. Based on the “Joint Statement of the 23rd ASEAN-Japan Summit on Cooperation on ASEAN Outlook on the Indo-Pacific” issued last year, and in view of the 50th anniversary of ASEAN-Japan Friendship and Cooperation in 2023, Japan has been working on the following priority cooperation areas of the “ASEAN Outlook on the Indo-Pacific (AOIP)”: (1) maritime, (2) connectivity, (3) SDGs, and (4) economy and other areas. He noted that substantial cooperation is already underway in these areas, and called on other G7 Foreign Ministers to advance such cooperation in line with the AOIP while supporting ASEAN centrality.

(Note: Minister Hayashi was unable to attend due to scheduling conflicts. Senior Deputy Minister for Foreign Affairs attended in his place.)
In addition to the G7, the Foreign Ministers of Australia, South Korea, and ASEAN countries participated in the session as outreach countries to discuss cooperation and common challenges in the Indo-Pacific.
The G7 expressed concern over the recent situation in Myanmar and stressed its support for the ASEAN Five-Point Consensus. The ASEAN Foreign Ministers also stressed the importance of implementing the Five-Point Consensus and expressed their willingness to work together to improve the situation in Myanmar.
Regarding the situation in the South China Sea, concerns were expressed about land reclamation and other serious incidents that could increase tensions and undermine peace, security, and stability. They also concurred on the importance of the Code of Conduct in the South China Sea (COC) being negotiated between ASEAN and China to be effective, substantive, and consistent with the United Nations Convention on the Law of the Sea (UNCLOS).
Other issues discussed included G7-ASEAN cooperation on infrastructure development, digital, technology, cyber, and maritime issues.

(Note: Minister Hayashi was unable to attend due to scheduling conflicts. Senior Deputy Minister for Foreign Affairs attended in his place.)
The new threat of the Omicron variant of COVID-19 was discussed.
The G7 reaffirmed their commitment to contribute towards vaccinating the world in 2022 and on working together to expand regional vaccine manufacturing and regulatory capacity, reinforcing health systems, and delivering quality vaccines and other services.
Through sharing doses, supply chain enhancements, expanding vaccine manufacturing capacity through voluntary licensing, technology transfers, and transparent roll-outs for COVID-19 vaccines to ASEAN countries (including through ASEAN-led mechanisms), the ministers discussed ways to strengthen how the G7 is cooperating with ASEAN to respond to the region's pandemic.