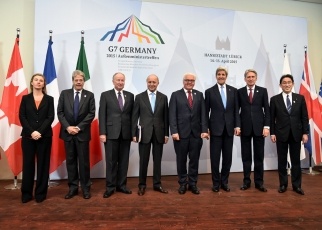 , ‘‘Beyond Ebola: a G7 agenda to help prevent future crises and enhance security in Africa’’ (PDF)

and the G7 Statement on Non-Proliferation and Disarmament (PDF)

The G7 welcomed the ‘‘key parameters on a Joint Comprehensive Plan of Action’’ that was reached at the end of March, and shared the view that they will support efforts for a final agreement. Additionally, they confirmed that they will seek to ensure that Iran takes responsible action in the areas of regional stability and human rights.
Minister Kishida stated that reaching a final agreement on the nuclear issue is important, and stressed that Japan has been making an effort thus far and will continue making every possible effort going forward.

The G7 shared the view that they strongly condemn the indiscriminate attacks, atrocities, murders and human rights violations being carried out by ISIL.
Minister Kishida emphasized that countries should coordinate with contributions that leverage their strengths, and undertake multilateral, long-term initiatives.

The G7 shared recognition regarding the importance of implementing the Minsk Agreement, and that the conflict will only be resolved as a result of a diplomatic resolution that respects international law and Ukraine’s sovereignty, territorial integrity and independence. They also shared the view that they will encourage Ukraine’s domestic reform.
Minister Kishida pointed out that the steady implementation of the Minsk Agreement is important, and that Japan will strive to improve the situation while attaching importance to the solidarity of the G7.

The G7 strongly condemned recent terrorism incidents, and shared the view that solidarity in the fight against violent extremism, holding moderate views, and tolerance are important. They also shared the view that the G7 will work together to strengthen counterterrorism.
Minister Kishida explained that Japan is pursuing comprehensive initiatives that focus on the three pillars of: 1) strengthening international and domestic counter-terrorism measures; 2) enhancing diplomacy towards stability and prosperity in the Middle East; and 3) assistance in creating societies resilient to radicalization.

Minister Kishida stated that this year is the 70th anniversary of the atomic bombings and attaches importance to presenting a path toward ‘‘a world without nuclear weapons’’ at the 2015 NPT Review Conference. He called for cooperation in order to achieve substantive progress. The G7 confirmed they will coordinate their commitment to a world without nuclear weapons. The G7 Statement on Non-Proliferation and Disarmament includes that the atomic bombings are reminders of the devastating consequences of nuclear weapons use.

Minister Kishida pointed out that in the context of maritime security, the principles of the rule of law and the peaceful resolution of conflicts should be respected. Furthermore, the G7 shared the view that they are committed to freedom of navigation and overflight and are concerned about attempts to unilaterally change the status quo, and that disputes should be resolved peacefully in accordance with international law.

The G7 stressed that they will work together and provide support to end the Ebola virus disease, and confirmed the need for medium- to long-term infection control measures and healthcare measures that utilize the lessons learned thus far.

The G7 confirmed that they will work together in the run up to the COP21 taking place in December this year, to ensure a new framework can be adopted.

Additionally, discussion took place on a variety of issues, including on the Middle East and Africa.